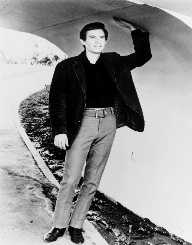 Bobby Fuller was an American rock and roll musician who is best known for his cover of, I Fought the Law, with his group The Bobby Fuller Four.

Fuller was born on 22 October 1942 in Baytown, Texas. While still young he moved with his family to Salt Lake City in Utah. In 1956, his father received a job offer from El Paso Natural Gas and Fuller and his family returned to his native Texas and settled in El Paso. The return to Texas coincided with the rise of rock and roll, which drew heavily from the Southern American roots of many of its stars. Fuller became a fan of fellow Texan rock and roller, Buddy Holly. He began playing music himself and fronted a four-man band.

Fuller started his career performing on the local club and bar circuit in El Paso. The group he played with was always in a state of line up flux with a high turnover of members. The only member who stuck with Fuller during these early years was his younger brother, Randy. Randy was Fuller's bass guitarist. Fuller built his recording studio in his home and acted as producer for his band’s recordings. To hone the production skills he also allowed other independent bands make use of his recording studio. Fuller’s group. By then known as The Bobby Fuller Four, moved to Loss Angeles and signed a record deal with Mustang Records. Mustang Records were noted for their surf music artists and discovering Ritchie Valens, who died in a plane crash with Fuller’s hero Buddy Holly and the Big Bopper. By the time Fuller moved to Los Angeles the British invasion led by The Beatles had already begun to dominate the rock and roll genre, and folk rock had largely led the American response.

Fuller maintained his Southern American influenced outlaw sound which drew heavily from his Texan upbringing. It was this sound that saw their cover of The Crickets’ song; I Fought the Law, become the definitive version of the song in America. The song reached number nine on the charts. Fuller also had success with a song he penned himself, Let Her Dance. The band’s third hit was another cover of a Crickets’ song; Love’s Made a Fool of You. The band also appeared in the 1966 film, The Ghost in the Invisible Bikini, alongside Nancy Sinatra. The band began to collapse that year as Jim Reese was called up in the military draft and Dalton Powell decided to quit for family reasons. However, these issues proved moot as Fuller was found dead in his car.

Bobby Fuller was found dead in his car and covered in hemorrhages, but with no bruising or broken bones to suggest a struggle. It was ruled that he died either by suicide or accident from the fumes of his car and the Californian sun. Some suggested the Manson Family murdered him, but no credible evidence has ever been produced. Fuller died on 18 July 1966.