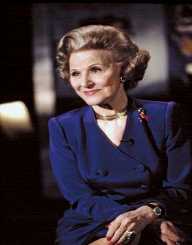 Esther Pauline “Eppie” Lederer known by the pseudonym Ann Landers was a famous American advice columnist. Born on July 4, 1918, she is known as the originator and writer of the column “Ask Ann Landers” beginning 1955 until her death. She is also the identical twin of the famous columnist Pauline Philips knownby the penname Esther Van Buren, who was the writer of the Dear Abby column.

Lederer throughout her career that spanned for almost five decades won the hearts of many people throughout the United States and internationally. She had about 90 million readerships at the peak of her career. President Jimmy Carter appointed Lederer to a cancer advisory board in 1977, serving a six-year term. She also served as a profile raiser for medical charities.

Ann Landers was born on July 4, 1918, to Rebecca (née Rushall) and Abraham B. Friedman, who were Russian Jewish immigrants. Her father was the owner of a movie theatre business, and her mother was a homemaker. Her identical twin sister is Pauline Esther “Popo” Friedman (Esther Van Buren). The two sisters received education at Central High School in Sioux City and after graduation enrolled at Morningside College where they majored in Journalism and psychology. The sisters contributed to the gossip column of the college’s newspaper.


Feud With Her Twin Sister

Laderer was the first to start the career as an advice columnist with Ask Ann Landers before her sister Esther Van Buren also took on the initiated. However, Lederer had bad blood with her sister because she did not inform her of her decision to start the columnDear Addy. She stated,"I felt betrayed. Because she didn't tell me that she was considering it, she didn't tell me -- she just presented it as a fact." The competition between the two sisters heightened as the two columns became very popular among US readers and internationally. This relatively destroyed the relationship between the sisters for more than a decade. Their rivalry was so deep that it even causedcompetition between publications.

When one newspaper publishes works of Landers, the other must also publish that of Van Buren to create readership competition. They somehow managed to patch their differences in 1964 during their joint wedding anniversary. However, the competition between them remained. Van Buren’s daughter Jeanne Philips in the July 8, 2017 edition of the Dear Abby column said her mother wanted to be a twin while her aunt preferred being an individual.

Career As A Columnist Ann Landers

In 1955, the originator of the Chicago Sun-Times Ask Ann Landers Ruth Crowley died and the position became vacant. Eppie contested for the position and won becoming the new Ann Landers. Throughout her career, she became one of the famous and trusted advice columnists, addressing questions for several individuals on various topics including homosexuality, which was at the time a taboo to in print. Unlike her sister’s Dear Abby, which took a more hearty and witty approach in responding to questions, Landers took the hard and more detailed approach in responding to questions.

Laderer through her writings advocated for the end of the Vietnam War and more funding for cancer research. She supported abortion right and other subjects, which were very controversial. Laderer enjoyed a celebrity lifestyle mingling with several celebrities and leaders. She attended several media and charity events mostly serving as a profile raiser for medical fundraising. Throughout her, almost 50-year career, Ann Landers, had millions of readership and was counted among the famous columnist of the time.

Esther Pauline and her twin sister Pauline Esther had a joint wedding ceremony onJuly 2, 1939, at the age of 21. She married Jules Lederer while her sister married Morton Philips in the presence of about 750 guests. The Lederers lived in Chicago for many years. They had a child, Margo, who also became a columnist. Landers and Jules divorced in 1975.

Lederer served as the chairperson for of the Minnesota-Wisconsin council of Anti-Defamation League between 1945 and 1949. In January 2002, Ledererdoctors diagnosed her of multiple myeloma but she refused any form of medical treatment. She died June 22, 2002.