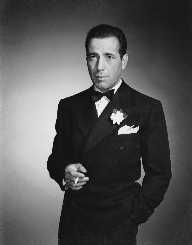 Humphrey Bogart is one of the American Actors and is well known for his performance in the films, Casablanca, The Maltese Falcon and The African Queen. He was born with a silver spoon in New York, and his parents always want to give him the best. He, however, did not take education seriously as he took with a hand of levity and this earned him an expulsion from the school for misconduct. Later on, he joined the United State Navy and later took up minor jobs which made him got appointed as a stage manager. Later on in the 1920s, he began getting minor acting jobs at the Broadway and later got ultimate lead roles in the middle of the decade.

Humphrey Bogart, however, shifted focus to Hollywood upon the crash of the stock exchange. He was later typecast as a gangster in B-grade movies and later became very successful with persistence and hardwork. At the beginning of the 1940s, he had been established as one of the mainstream actor as well as a lead man. He kept on giving hits over hits. He is presently a living legend in the world of acting.

Humphrey Bogart was born in New York to a well-known heart surgeon, Dr. Belmont DeFrost Bogart and a famous Painter, Maud Humphrey. Most of the time he acted his mother’s model while he was young. He was born on 25 December 1899 as the eldest of his parents’ three children. His parents were always ready to act formally with the children and often forced them to school. He studied at Delancey School, Prestigious Trinity School, and Elite Phillips Academy. The wish of his parents was to see him through to theUniversity of Yale, but he was unfortunately expelled from the High School before. He later joined the US Navy and was discharged honorably at the end of World War I in 1919. It was however during that period that his family’s fortune decreases and his father were sick.

His father’s sickness made him look for works to sustain himself and the family. Humphrey Bogart finally got a job at the World Film Corporation which was owned by Willaim Aloysius. There, he tried his hands at different jobs including script writing and directing. Unfortunately, he failed. Humphrey Bogart later got introduced to acting by William’s daughter, Alice. He started as the stage manager before making his stage debut in 1921. Humphrey Bogart however almost fumbled as he couldn’t mutter his one line dialogue. He persistently worked hard to ensure that he became better. He kept appearing in different movies improved than before.

He later got his first leading role in 1925 in a comedy Cradle Snatcher. This success was what made him enter the favor list of some directors. He eventually got his debut short film in 1928. The crash of the stock market and its effects on the stage production made it very hard for to continue. He ventured into Hollywood with Spencer with whom he co-starred in Up the River. He kept getting lead roles and even played in The Petrified Forest. This play wore the Hollywood directors attention as it grossed $500, 000 at the box office.

Despite this success, he got a contract of $550 per week by the Warner Brothers which he has no option than to accept it. Humphrey Bogart kept on making movies every two months from 1936 to 1940. In 1941, he eventually got a role in High Sierra. The movie was a very successful one, and he earned critical acclaim. He kept on acting in movies until 1954 and acted in The Harder They Fall, Beat the Devil and The Barefoot Contessa.

Humphrey Bogart is fortunate to have appeared in about seventy-five movies of which Casablanca, To Have and Have not, Lonely place and Caine Mutiny are regarded as screen classics.

He won the Academy Award for the Best Actor in this movie The African Queen in 1951. He also got named the top male film star of the 20th century by the American Film Institute. He then attained the status of a legend in his lifetime.

Humphrey Bogart married on 20 May 1926 to Helen Menken whom he married after four years of courtship. This marriage did not last very long as the two divorced on 18 November 1927. Sooner, on 3rd of April, 1928, Humphrey Bogart got engaged to actress Mary Philips before he moved to Hollywood. However, his wife refused to move with him, and they finally got broken up in 1938. He later married again, but the marriage did not last because of a suspicion of infidelity from his side. He went ahead to knot a tie for a fourth time with Lauren Bacall. This marriage subsite till his death in 1957.