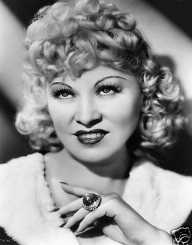 Mae West was born on August 17th, in 1893. She was an American actress that rose to fame during the Hollywood’s golden age. With her exceptional beauty in the film industry, she was recognized as a sex symbol. One thing that she is to be remembered for during her film career is her blunt sexuality. This is what made her eminent and notorious at the same time. West passed away at the age of 87.

Mae West was born on August 17th, 1893. Her place of birth was in Bushwick, Brooklyn in the New York City. She was the daughter of John West and Matilda Delker. Her father worked as a special policeman and later on went to possess his private investigations agency. Delker was a model.

Mae West began entertaining people right from the time she was only five years old. She entertained small social gatherings and the church congregation during this time. Later on, when she was seven years old, she had started making appearances in amateur shows. She was awarded prizes that she won at these local events she competed in. Her professional on-stage performance began in 1907 at Hal Clarendon Stock Company. At this time, she was 14 years old and had the professional on-stage name “Baby Mae.”

Her performance on stage kept on improving thanks to the full support that West gained from her mother. According to her mother, everything that West did was nothing but fantastic. Sooner or later, her mother was fully involved in her performances as she took the role of her manager.

With the remarkable writing skills that Mae West was blessed with, she began her writing career. Initially, she wrote her plays and went on to play the lead role in them. This was the beginning of controversy in her career. In 1926, one of her plays called Sex brought her into the limelight. This play was a hit, and it attracted a large audience for the wrong reasons. Its content was controversial and that it led to the arresting of the cast members including West. After her release, the earlier incident did not negatively affect her. It boosted her writing and on-stage career as she gained nationwide popularity after the play and the media aired the arresting incident.

Following the success of Sex, she followed it with another mostly controversial play titled The Drag. This play’s subject revolved around homosexuality. As a result of its depiction of homosexuality, West became one of the earliest individuals to support gay rights.

Her success on stage attracted a large following to her side including several film production houses such as the Paramount Pictures. She entered into a contract with them in 1932. Around this time, she made her first film appearance in Night After Night-1932. The following year, she landed another lead role in She Done Him Wrong-1933. Other films followed suit such as I'm No Angel- 1933, Belle of the Nineties- 1934, Going to Town- 1935, Go West, Young Man- 1936 and My Little Chickadee- 1940.

Mae West also ventured into radio as she depended heavily on the success she had earned both in film and on stage. She made her first appearance on radio in 1937. The radio show she appeared in was called The Chase and Sanborn Hour. However, her image on radio was strongly criticized as she used vulgar language on radio. This, therefore, soiled her radio career image. There were numerous critics surrounding the radio shows that Mae West was involved in. A number of them claimed that her shows were immoral.

In 1911, Mae West got married when she was only 17 years of age. She had secretly been married to Frank Wallace. The duo never lived together as man and wife. They divorced in 1942. There were other relationships that she was associated with men including Guido Deiro, James Timony, and Chester Rybinski.