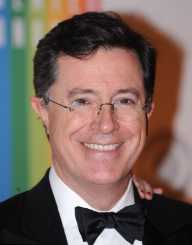 American comedian, writer, actor, political satirist and host Stephen Colbert was born on the 13 May 1964 in Washington D.C. to Lorna Elizabeth Tuck and James Colbert into a large Catholic family. Colbert Snr. And two of his sons, Paul and Peter were killed in the crash of Eastern Air Lines Flight 212 in Charlotte, North Carolina on the 11 September 1974. After the death of her husband, Colbert’s mother relocated her family to Charleston.

Stephen Colbert was a pupil at Charleston’s Episcopal Porter-Gaud School, and after graduation enrolled at Hampden-Sydney College in Virginia (1982-1984), He then moved to Northwestern University, obtained a degree in theatre (1986).

Stephen Colbert joined the Second City Comedy Tour in 1988 and during that time became acquainted with Amy Sedaris and Paul Dinella.  In 1995 Colbert joined Sedaris and Dinello in New York when they relocated there to develop a new television series.

The show, Exit 57,  debuted on Comedy Central (1995-1996). He then worked on The Dana Carvey Show and spent did some freelance writing for Saturday Night Live. In 1997 he joined The Daily Show.

In 2005, Stephen Colbert started hosting his television show, The Colbert Report (2005-2014). Then in April 2014, it was reported that Colbert would be replacing David Letterman as host of The Late Show. Colbert took over the show on the 8 September 2015 when David Letterman retired.

In 2006 Stephen Colbert was the guest speaker at the White House Correspondents Dinner.  Then in 2007, his application for a Democratic ticket for South Carolina was refused because it was decided that he was not a serious candidate. His book, I Am America (And So Can You) was published in 2007. He filmed the show Operation Iraqi Stephen: Going Commando in Baghdad in 2009.

Stephen Colbert has won numerous nominations and awards including a Grammy award for A Colbert Christmas (2010) for the best comedy album.

In 1993, Stephen Colbert married Evelyn McGee. They have three children and live in New Jersey. He is a lifelong JRR Tolkien fan and is an expert on The Lord of the Rings. He had a cameo appearance in the film The Hobbit.

Being a fan of the sci-fi genre, he is also knowledgeable about the Star War films. A treadmill on the International Space Station is named after Colbert. And there is a native Californian spider, the Aptostichus stephencolberti that carries his name.

Due to complication from ear surgery, Stephen Colbert is deaf in one ear. During his college years, he suffered from anxiety and depression which required medication.

During 2010, Stephen Colbert appeared before the US Congress to talk on the need to expand the legal rights of undocumented migrant workers.

For many years he has been involved in the raising of funds for US veterans, and he has also raised $800,000 to fund public school teachers requests from South Carolina on DonorsChoose.org.