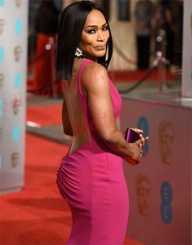 Angela  Bassett is an American actress born on August 16, 1958. Angela  Bassett has paid her dues ever since she announced her presence in the movie industry. With her talent and articulation, she has graced several theatres, stages and has made it to the big screens. Starting her career with minor roles, she has since starred in numerous films and other productions. Some of her notable films include What’s Love Got to Do with It, 1993 which won her the Golden Globe Award and a nomination for the Academy Awards for Best Actress. She has also featured in Malcolm X, 1992 where she played Betty Shabazz, Panther, 1995, The Jackson: An American Dream, 1992 and Notorious, 2009. Bassett has gained several nominations and awards for her splendorous skills, flair, and talent.

Angela Bassett was born to Betty Jane and Daniel Benjamin Bassett in New York City. She spent most of her childhood years in the Harlem neighborhood. However, after the divorce of her parents, she moved to Winston-Salem, North Carolina with her younger sister in the care of a social worker. She had her elementary education at the Jordan Park Elementary School and continued to the Disston Middle School in 1970, where she did her seventh grade. After her seventh grade, she moved to the Azalea Middle School for her eighth and ninth grade through the busing system. Bassett gained interest in the entertainment industry and loved to listen to the Jackson 5. She was in love with them at the time.

She partnered her younger sister to perform songs of popular artists and read poems for family members. That art in other ways was developing her acting skills and performance. Through the bussing system, she also made it to the Boca Ciega High School where she was a cheerleader and was also part of the debate team, student government, drama club, and choir being a member of the college prep program Upward Bound. After her college education, she enrolled at the Yale University in 1980 where she graduated with a B.A degree in African-American studies. She also did her Master of Fine Arts degree at the Yale School of Drama. Her decision to pursue the course in arts met a strong contention from her father’s sister who at the time said she pursued a course in the theatre was a waste. Nonetheless, she continued and graduated in 1983.

Angela Bassett started a career as a receptionist for a beauty salon and then a photo researcher. As a student of fine arts, she looked for opportunities in acting and finally had one in the New York Theater. Her acting debut was in J.E Franklin’s Black Girl at the Second Stage Theater. She also had a role in Ma Rainey’s Black Bottom, 1984 and Joe Turner’s Come and Gone, 1986. Angela Bassett made a debut in television playing a role in the TV movie Doubletake as a prostitute and later in F/X in 1986. Having gained some experience in acting, she moved to Los, Angeles, California in 1988. There she had a role in the film Boyz n the Hood in 1991 and Malcolm X, 1992 which brought her into the limelight. Her role in Malcolm X won her an Image Award. Bassett had now gained some roots in the movie industry with a positive image; she had other roles like Katherine Jackson in The Jackson: An American Dream in 1992.

Though she was advised not to accept the role due to the negative image Michael Jackson had at the time, she insisted on taking it because she has been a fan of the Jackson 5 since childhood. In 1993, she starred in What’s Love Got to Do with It as Tina Turner, a role which won her a Golden Globe Award for Best Actress and her first Academy Award nomination. The award made her the first African-American to win the Golden Globe Award for Best Actress- Motion Picture Musical or Comedy. Basset has at this time become a household name, and that came with several other roles.

In 1995 Angela Bassett played roles in movies like Vampire in Brooklyn, Strange Days and Waiting to Exhale. The movies came with diverse reviews. But in all her roles had positive outcomes. She played roles in several other movies in the 1990s, including How Stella Got Her Groove Back, Music of the Hear and Contact. Another decade in her movie career started in 2000 with her rejecting a role in Monster Ball because of its sexual contents. That same year she had roles in Supernova, Whispers: An Elephant’s Tale and Boersma and Lena. In 2002, her role in The Rosa Park Story gained her nomination in the Primetime Emmy Award for Outstanding Lead Actress in a Ministries or a Movie. Bassett will sum up her work in the decade with a role in Notorious where she played Voletta Wallace, the Mother of The Notorious B.I.G in 2008.

Angela  Bassett would in the next decade (the 2010s) play numerous roles in films like Green Lantern, 2011, One Police Plaza, 2011, The Mountaintop, Jumping the Broom, Betty, and Coretta, Malcolm X and Panther. Her other films include the action thriller of Olympus Has Fallen, 2013, Black Nativity in which she sang was her first time she had actually done that in a movie. She admits lying to the director to get the role when she was asked whether she can sing. She played Marie Laveau, a voodoo witch in the FX TV show American Horror Story: Coven.

She earned a nomination for the Primetime Emmy Award for Outsourcing Supporting Actress in a Ministries or a Movie for her role. Bassett explored other sectors in the movie industry by venturing into directing. Her first movie as a director was Whitney, which was based on the life of Whitney Houston. Whitney Houston’s daughter Bobbi Kristina took Angela  Bassett on for not casting her to play her mother. She took on Twitter and insulted Bassett which Bassett later admitted she never thought about casting Kristina. In 2016 she featured in American Horror Story: Roanoke and directed its sixth episode. Her directing role in that episode made her the third woman to direct the show. Basset has really cemented her position in the movie industry, and there is much to follow.

Angela Bassett was married to actor Courtney B. Vance in 1997. The couple first met at the Yale School of Drama in 1983. They have since been blessed with twins Slater Josiah Vance and Bronwyn Golden Vance on January 27, 2006. Bassett and husband starred in the production His Girl Friday at the Guthrie Theater. She is a supporter of the Royal Theater Boys &the Girls Club in her hometown of St. Petersburg, Florida. As a form of charity works, Angela  Bassett serves as an Ambassador of UNICEF, USA and does attend events for children with diabetes and others in the foster home. In Politics, she supported the reelection of Barrack Obama and actively supported his campaign in 2012. She also endorsed the candidature of Hillary Clinton for the 2016 presidential elections.

Angela Bassett received several nominations and won some of it. She the Golden Globe Award in 1993 for a role in What’s Love Got to Do with It making her the first Africa-American to win the Golden Globe Award for Best Actress- Motion Picture Musical or Comedy. She received the honor of being the 2,358th star on the Hollywood Walk of Fame, Los Angeles in 2008.