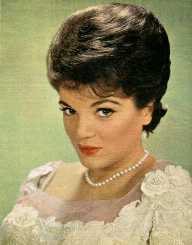 Connie Francis music career was characterized by difficulties and inconsistencies. She became the top-charting female vocalist during the latter part of the 1950s and early 1960. Her popularity and chart success, however, could not stand the test of time as it waned in the second part of the 1960s. Despite this, she remains a top concert draw and continues to be a recording and performing artist. Connie has recorded in nine languages.

Connie Francis was born on December 12, 1938, in the Italian Neck of Newark, New Jersey. He is the first of George Franconero Sr., and Ida Franconero (née Ferrari-di Vito). She is of Italian descent. The family moved to New Jersey after Connie Francis spending her childhood days in a Brooklyn neighborhood. She grew up in an Italian-Jewish community and therefore became fluent in Yiddish. Growing up, she was encouraged by her father to contest in talent shows as a singer and accordion player. She recalls this in her autobiography“Who’s Sorry Now?” in 1984. She received education at Newark Arts High School and continued at Belleville High School, graduating in 1955.

Connie Francis began her musical career with lots of disappointments as many major recording labels turned her down until MGM Records finally decided to sign her. Her debut single with the label wasFreddy, which performed badly commercially. She would release eight other singles, which all turned out to be commercial failures. Nonetheless, she had a deal to record the vocals for the singing scene of Tuesday Weld in the movie Rock Rock, Rock, 1956.

The following year did the vocal for Freda Holloway in the rock and roll movie Jamboree. Her first chart success was the duet single with Marvin Rainwater, "The Majesty of Love," in 1957. The track backed with "You, My Darlin' You," reached No. 93 on Billboard’s Hot 100. "The Majesty of Love" sold about one million copies. Since her contract with MGM Records consisted of 10 singles and one duet, the label informed her the contract will not be renewed after her last recording.

On October 2, 1957, upon the insistent of her father, Connie Francis reluctantly recorded a cover version of the 1923 song “Who’s Sorry Now?”, written by Harry Ruby and Bert Kalmar. This was to be her last recording with MGM Records. She did not believe the song was going to make any difference as would be like the previous failures. However, time proved her wrong as the song became a hit charting No. 1 on the UK Singles Chart and at No. 4 in the US. The success of the track made MGM Records renew her contract. This was followed by "I'm Sorry I Made You Cry" and “Heartaches,” but the song could not perform as Who’s Sorry Now?.

Connie Francis next his song was “Stupid Cupid, which charted at No. 14 on the Billboard and No. 1 in the UK. She continued to released other hits songs including “Among My Souvenirs,” “My Happiness,” “Lipstick on Your Collar and “Frankie.”

In November 1959, she released the Italian album Connie Francis Sings Italian Favourites recorded at Abbey Road Studios. The album peak at No. 4 and remains her all-time most successful album. The single on the album Mama charted number 2 in UK and number 8 in the US. Recording in multiple languages, she became one of the first American artists to record in different languages.

She continued to release other hit albums and singles and remained popular in the 1950s and the early days of 1960s. Her attained popularity and success on the chart began to wane in 1963. Even though some of her releases continued to chart it was not as previously. She also continued to remain a top concert draw.

On November 8, 1974, Connie Francis was raped at her hotel, Jericho Turnpike Howard Johnson’s Lodge in Jericho, New York. She was inNew York to perform at the Westbury Music Fair in. The culprit put her under a heavy mattress, which nearly suffocated her. After the incident, she sued the motel for failing to provide adequate security.

She was awarded $2.5 million in damages and this case led to a change in operation in motel and reforms in hotel security. Francis underwent depression after the incident and at a point even decided to commit suicide.

Four years after the incidence, Connie Francis came out with the studio album “Who’s Happy Now which included the title song "Where the Boys Are." Songs on the album were also recorded in Japanese, Spanish, German, and Italian. It was followed with the albums “I'm Me Again," 1981, which was her last recording with MGM Records. In 1989, she released the double album, Where the Hits Are on Malaco Records. She has also released the live album The Return Concert, 1995, and the tribute album With Love To Buddy in 1996.

Connie Francis has married five times. They areJoseph Garzilli a restauranteur and travel agency owner, from 1973 to 1978. Married for five years, it remains her longest ever union. Her marriage to press agent and entertainment director for the Aladdin Hotel, Dick Kanellis lasted for four months. Others are to a hair salon owner Izzy Morrison for ten months and to TV producer Bob Parkinson for eight months.

Connie Francis published her autobiography, Who’s Sorry Now? in 1984. It was a New York Times bestseller. In 1963, she published her first autobiographical book, For Every Young Heart. She was honored with a star on the Italian Walk of Fame in Toronto, Canada in 2009.