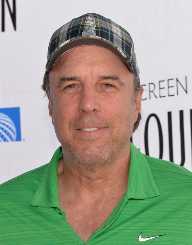 American comedian and actor Kevin Nealon was born on the 18 November 1953 in St. Louis, Missouri.

Nealon graduated from St. Joseph High School, Trumbull Connecticut and then studied at the Sacred Heart University in Fairfield. He obtained a marketing degree.

Post-Saturday Night Live Nealson appeared in Happy Gilmore (1996) where Kevin Nealon starred with Adam Sandler, the television show Champs and Hiller and Diller. He also continued working as a stand-up comedian, making appearances on various shows such as Late Night with David Letterman. Between 2005-2012 he was in Weeds, a Showtime television comedy. Recent roles include playing Ron Saxby in The Soul Man (2016) and Don Burns in Man With A Plan (2016-2017).

Besides acting and comedy, Nealon is an author. His first book was Yes; You’re Pregnant, but What About Me? (2008)

Kevin Nealon is a musician and plays the banjo as well as the guitar.

Kevin Nealon and Susan Yeagley were married in 2005. They have a son Gable Ness (b.2007). He is a committed vegetarian and has been for over two decades.