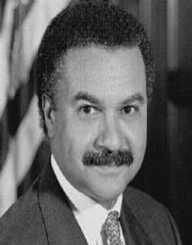 Ronald Harmon Brown was born on 1st August 1941, in Washington, D.C., in the United States. He grew up in Harlem, New York, where his father managed the Theresa Hotel.

Brown attended Rhodes Preparatory School, one of the few black students to do so. He also studied at Middlebury College, and after graduating in 1962, he enlisted in the United States Army.

Ron Brown was discharged from the army in 1967, after which time he joined the National Urban League (NUL). The NUL was a leading economic group for equality in the U.S. At the same time, Brown enrolled at St. John’s University to study law, and graduated in 1970 with his law degree.

Brown advanced his position at the NUL until he was appointed Deputy Executive Director for Programs and Governmental Affairs in 1976. In 1979, he resigned to become the Deputy Campaign Manager for Senator Edward M. Kennedy, who was seeking his party’s presidential nomination.

In 1981, Ron Brown joined Patton Boggs, a law firm in Washington, D.C., as both a lawyer and a lobbyist.

In May 1988, Brown joined the Democratic National Convention in Atlanta as part of Jesse L. Jackson’s team. A short time later, Brown was running Jackson’s campaign.

In 1989, Brown was elected to the position of Chairman of the Democratic National Committee. He ran a very successful Convention in 1992, and he was also instrumental in the successful presidential campaign for Bill Clinton that same year.

In 1993, Ron Brown was appointed to the position of Secretary of Commerce by President Clinton.

While Brown was in the position, he was embroiled in what would become known as the Commerce Department trade mission controversy. During the years Clinton was in power, it is alleged that business people paid up to $100,000 for a seat on U.S. federal planes that were going overseas on trade missions. The purpose of selling the tickets was supposed to raise funds for campaigning.

Charges were never forthcoming, but the Commerce Department changed their policy to avoid any controversy in the future.

On 3rd April 1996, Ron Brown was on a trade mission, and with 34 other people on board, the plane crashed into a mountain, in Croatia. Everyone on board was killed on impact excepting one of the flight attendants, and she died on her way to the hospital.

There were rumors and conspiracy theories, some suggesting Brown had been murdered by Clinton. There were written requests to federal officials asking for further information on the death of Brown.

An official of the Armed Forces Institute of Pathology said there was a circular wound on the top of Brown’s head which was puzzlement at the time when his body was being examined. It was then announced that foul play was ruled out, and it was blunt force trauma to the head and nothing else.