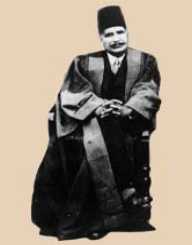 His literaryworks and influence spanned through Pakistan, Iran, India, Sri Lankan and Bangladesh and held him in high esteem in these countries. Some of his works include Asrar-i-Khudi, Zabur-i-Ajam, Payam-i-Mashriq, Rumuz-i-Bukhudi, Zarb-i-Kalim, Bang-i-Daral, Bal-i-Jibril and Armughan-i-Hijaz. Aside from his literary works, Iqbal was a highly celebrated and acclaimed "Muslim philosophical thinker of modern times."Iqbal was knighted by King George V in 1922.

Muhammad Iqbal was born on November 9, 1877, in Sialkot, Punjab Province of British India (currently Pakistan) to Sheikh Noor Muhammad and Imam Bibi. At age four, he studied Qur’an at the masjid. In 1893, Muhammad Iqbal was admitted at the Scotch Mission College, Sialkot where he learned the Arabic language from Syed Mir Hassan, head of the madrassa and professor of theArabic language. After graduating, he enrolled at the Murray College Sialkot’s Faculty of Arts in 1895. Muhammad Iqbal entered the Government College Lahore that same year and graduated with Bachelor of Arts in philosophy, English literature and Arabic in 1897. Igbal won the Khan Bahadurddin F.S Jalaluddin medal for his higher marks in Arabic class.

Muhammad Iqbal then received his Master’sof Arts degree in 1899 from the college gaining the first place in Punjab University, Lahore. While at the Government College, his philosophy teacher, Sir Thomas Arnold, who influenced his studies, hence, wanted to pursue further studies in the West. To fulfill this purpose, Muhammad Iqbal traveled to England in 1905. In 1906, Muhammad Iqbal gained a scholarship to pursue a Bachelor of Arts at the Trinity College, University of Cambridge.

Muhammad Iqbal was called to the bar as a barrister from Lincoln Inn that same year. A year after, he left for Germany for his Doctorate in Philosophy degree at the Ludwig Maximilian University and graduated in 1908. Iqbal’s doctoral theses titled The Development of Metaphysics in Persia was under the supervision of Friedrich Hommel. It was during his stay in Europe that he learned how to write poetry in Persian.

Muhammad Iqbal began a career as an Arabic reader at the Oriental College after his master’s degree in 1899. He later went to his alma mater, Government College, where he gained an appointment as a junior professor of philosophy where he served until leaving for England. Muhammad Iqbal returned there as a professor of philosophy and English literature after his return in 1908. Muhammad Iqbal also practiced law at Chief Court Lahore that same year but had to quit law for some time for his literary work. Muhammad Iqbal then joined the Anjuman-e-Himavat-e-Islam, becoming the general secretary in 1919. Iqbal work was much focused on spirituality and the development of human society picking inspiration from his stay in Europe and the Middle East. Philosophers like Henri Bergson, Goethe, and Friedrich Nietzsche also had great influence on his work.

Muhammad Iqbal published works in both Persian and Urdu languages but was more focused on the Persian language. With his over 12,000 poetry verses, about 7,000 of it was in Persian. Muhammad Iqbal also had few English works. His first collection of poetry was the Asrar-i-Khudi (Secrets of the Self) in 1915, which was regarded as one of his finest work by critics. Muhammad Iqbal went on to publish Rumuz-i-Bukhudi (Hints of Selflessness) in 1917. In this, he regards Islam as the best way of life for nation’s viability. His next Persian work wasPayam-e-Mashriq (The Message of the East) published in 1924. The book set on inspiration from Goethe’s West-östlicher Diwan, Muhammad Iqbal sought to remind the West of how important religion, civilization, and morality, underscoring the need for harboring passion and dynamism.

Muhammad Iqbal published the book Aabur-e-Ajam (Persian Psalms) in 1927, which included poems like Gulshan-e-Raz-e-Jadeed (Garden of New Secrets) and Bandagi Nama (Book of Slavery). Muhammad Iqbal went on to publish other Persian works including Javed Nama (Book of Javed) in 1932 among several others. Even though most of Igbal works were in Persian, he also focused on the Urdu language most in the 1930s. Most of his work in this language was directed to the Muslim community in India. His first work in that language was Bang-e-Dara (The Call of the Marching Bell) published in 1924. He then came out with Bal-e-Jibril (Wings of Gabriel) in 1935, and that was considered by critics as his finest Urdu poetry.

Muhammad Iqbal next work was the Pas Cheh Bayed Kard ai Aqwam-e-Sharq (What are we to do, O Nations of the East?), which includes the poem Musafir (Traveler). His last work in that language was Armughan-e-Hijaz, which was published posthumously in 1938. Most of his works were translated into several international languages. Due to illness, he totally abandoned his law practice in 1932, the same year that he died. Around this time, he was collaborating with Chaudhry Niaz Ali Khan to establish the Dar ul Islam Trust Institute at Jamalpur. It was aimed at giving subsidized studies in classical Islam and contemporary social science.

Muhammad Iqbal married three times. He was first married to Karim Bibi in 1895 and had two children, Miraj Begum and Aftab Igbal. His second marriage was to Sardar Begu and lastly to Mukhtar Begum in 1914. He suffered a throat illness in 1933 after one of his trips from Spain and Afganistan. Muhammad Iqbal died on April 21, 1938, in Lahore.

King George V knighted Muhammad Iqbal with the title “Sir” in 1922. Muhammad Iqbal has gained several accolades including the Musawar-e-Pakistan(Artist of Pakistan"), Shair-e-Mashriq (Poet of the East),  Hakeem-ul-Ummat (The Sage of the Ummah), Mufakkir-e-Pakistan( The Thinker of Pakistan) and was named the National Poet by the Pakistan government. His birthday has been instituted as a public holiday in Pakistan known as the Y?m-e Wel?dat-e Muhammad Iqbal (Iqbal Day). His house in Sialkot, Igbal’s Manzil is opened to visitors.