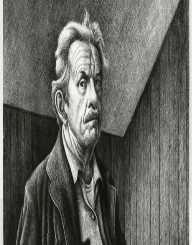 Thomas Hart Benton was born on 15 April 1889, in Neosho, Missouri, United States. He was the eldest child of his mother Elizabeth Wise Benton and his father Colonel Maecenas Benton. He had two younger sisters and a younger brother. His father hailed from an influential political family and was himself a lawyer and a four-time elected representative of the U.S. Congress. During his childhood, Thomas frequently traveled between Washington D.C. and Missouri due to his father’s political career. During 1905-06, he was sent to Western Military Academy by his father to prepare him for a future political career.

However, Thomas had other ideas and priorities in life. He was passionate about art and painting. Revolting against his father’s plan to see him as his successor as an accomplished politician, he started pursuing his dream of becoming an artist. His mother encouraged and wholeheartedly supported him in this endeavor. During his teens, he was associated with the Joplin American Newspaper as a cartoonist in Joplin, Missouri. With his mother’s blessings and motivational support, he enrolled at The School of The Art Institute of Chicago in 1907. He continued to pursue his art education and in 1909 moved to Paris to study at the Académie Julian for a three-year stint.

During his stay in Paris, Thomas Hart Benton learnt the modern art movements such as Synchromism and Cubism. He also got acquainted with other North American artists like the Mexican Diego Rivera and Stanton Macdonald-Wright. The latter was an exponent of Synchromism, and Thomas adopted a Synchromist style of painting after being influenced by the same.

Thomas Hart Benton came to New York City in 1912 after completing his studies. Over the next decade, he engaged himself in experimenting with different styles of painting. Adopting the modern style of Synchromism as his favorite style of painting, he unveiled the musical qualities of color with his dazzling display of colour and portrayed a realistic description of people working or playing in the field against the background of their natural rural habitat. Unfortunately, most of his paintings of this period were destroyed in a studio fire.

After his release from the U.S. Navy on completion of the World War I, Thomas Hart Benton came back to New York and was appointed as a teacher at the New York Art Students League. He resumed painting depicting the everyday life of the Americans and also started moving in avant-garde art circles of New York. During the 1920s, he abandoned modernism and began the naturalistic and representational style of painting known as Regionalism these days. His famous mural ‘America Today’ is a classic example of this painting style.

Born in a family of politicians, Thomas Hart Benton had a natural apathy towards politics. However, during the 1920 and 1930s, he gradually got inclined towards leftist politics. In 1929, Thomas became the spokesman for the American Regionalist Painters. A number of his famous mural paintings were drawn during the 1930s. Among them ‘City Scenes’ (1930-31) and ‘The Arts of the West’ (1932) were some of his works of magnificence.

Thomas Hart Benton bagged a contract to paint the murals of Indiana life to be shown in the 1933 Century of Progress Exhibition in Chicago. The murals painted for this purpose were subjected to a raging controversy. In the murals, the members of the Ku Klux Klan were shown in full regalia which became the prime cause for the criticism and the subsequent debate. In 1932, he was invited to paint Arts of Life murals for the Whitney Museum of American Art’s Library. ‘Arts of the South,’ ‘Indian Arts,’ ‘Arts of the City’ and ‘Arts of the West’ are examples of some of the most beautiful murals he painted for the museum.

With his growing popularity, Time Magazine featured Thomas Hart Benton in one of the earliest colour covers in their December 24, 1934, issue. Recognizing his talent along with compatriot artist Grant Wood and John Steuart Curry, the trio was hailed as the new icons of American art and Regionalism was granted as the most significant art movement. In 1935, he created a mural for the Missouri State Capitol in Jefferson City. The mural titled ‘A Social History of Missouri’ is probably one of his best works.

In 1935, Thomas Hart Benton was offered a teaching job at the Kansas City Art Institute. He accepted the offer and subsequently settled in Kansas City, Missouri, serving the Institute till 1941. With more comfortable and convenient access to rural America from his base in Kansas City, he went on to create some of his best-known works including the metaphorical nude ‘Persephone.’

Thomas Hart Benton published his Autobiography ‘An Artist in America’ in 1937 which won rave reviews. During the World War II, he came up with a series titled ‘The Year of Peril.’ In the series, he depicted the existing American ideals being threatened by Fascism and Nazism. Though the initial euphoria and hype about the Regionalism went into oblivion with the passage of time, Thomas continued painting during his later life. He was elected as an Associate member of the National Academy of Design in 1954 and was elevated to the position of a full member after two years.

Thomas Hart Benton married his former student, Italian immigrant Rita Piacenza in 1922. The couple was blessed with a son and a daughter. Thomas died in 1975 in his studio completing his final mural ‘The Sources of Country Music.’ His wife with whom he spent almost 53 years of married life, died eleven weeks after his death.