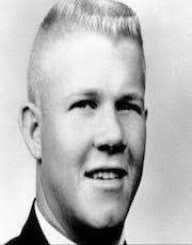 Charles Joseph Whitman was born 24th June 1941 to Charles and Margaret Whitman. He was born in Lake Worth, Florida, in the United States. Whitman had two younger brothers, and he came from a family of domestic violence.

Whitman's father abused the family regularly, both emotionally and physically.

Failure was not an option in the family, and Whitman was academically very bright. He also learned piano, and by 12 years of age was a proficient player.

Their father was a keen collector of firearms. He taught all three boys to shoot, as well as clean and look after their weapons.

Charles Whitman started his studies at St. Ann's High School in 1955. He delivered newspapers out of school hours as a part-time job. Just one month after starting high school, he had saved enough money to buy a motorcycle.

He graduated in 1959, and immediately joined the U.S. Marine Corps. He didn't tell his father he had enlisted. As a result, when he left home to begin an 18-month tour of duty, his father still had no idea.

Whitman's father found out while Whitman was in transit to begin his assignment. He tried to have Whitman's enlistment canceled but to no avail.

Charles Whitman applied to the scholarship program of the U.S. Navy and Marine Corps once his 18-month tour was complete. The selection committee accepted his application, and he began his college studies in Maryland. Whitman subsequently transferred to the University of Texas in Austin to continue his later studies.

In September 1961, he started his mechanical engineering studies at the University of Texas.

He poached a deer with two friends. They were subsequently caught, then arrested and fined.

Charles Whitman failed to achieve sufficiently high grades with his study. As a result, his scholarship was canceled, and he was sent back to active duty.

Whitman was promoted to Lance Corporal. However, he harbored resentment at the termination of his studies.

Soon after, he started getting into trouble. He was charged with offences including possession of a personal firearm, gambling, and threatening another marine. The Corps demoted him to Private as a result.

Whitman received an honorable discharge from the Marine Corps in December 1964.

Charles Whitman returned to his studies at the University of Texas. He entered the architectural engineering program.

In between his studies he worked to support himself and his wife. He had also started a journal while waiting for his court-martial in 1963, and he made daily entries.

His mother announced in May 1966 that she was divorcing Whitman's father. Whitman helped his mother and youngest brother move to Austin. His mother got a job and kept in close contact with Whitman. His father was continually on the phone to them trying to get his wife to return.

Charles Whitman became addicted to amphetamines due to the stress during this period of his life. He also complained of severe headaches.

On 31st July 1966, Whitman typed his suicide note. He explained that irrational thoughts continually entered his head and he found it very difficult to concentrate on routine tasks. He also asked for an autopsy to see if there was a biological reason for what was happening.

Whitman stated he was going to kill his wife and mother. He said it was to save them the embarrassment of having to live with his actions.

He drove to his mother's place on 1st August 1966 just after midnight. Whitman killed her, leaving a remorseful note next to her body. Finally, he went home and killed his wife.

Later that morning, he went to the University of Texas. After climbing to the 28th floor of the UT tower, he started shooting at random.

Charles Whitman killed 14 people and wounded a further 31. A policeman by the name of Houston McCoy shot and killed him.

Examiners discovered Charles Whitman had been to see several doctors at the University during the prior year.

The autopsy discovered a brain tumor. The results were inconclusive as to whether it had any bearing on Whitman's behavior.