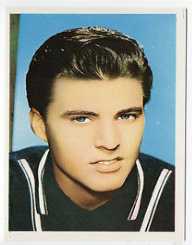 American recording artist and songwriter Ricky Nelson was born Eric Hilliard Nelson on the 8 May 1940 in Teaneck, New Jersey. He was born into a show business family and from a young age was appearing on television and radio with his parents and brother.

Because of his parents work commitments, when Nelson was an infant he lived with his grandparents until 1942. He then joined his parents in Los Angeles where he was raised.

Ricky Nelson was eight years old when he started working on his parents’ radio show The Adventures of Ozzie and Harriet (1949). In 1952 he appeared with his family in the film Here Come the Nelsons. Because of the success of the film, the show was moved from radio to television (1952-1966). During his early years,

Nelson experimented with the clarinet, drums, and guitar. His first recording deal was with Verve Records, and he went on to record I’m Walkin’ and A Teenager’s Dream (1957) as a single as well as You’re My Only Love (1957)

Ricky Nelson promoted I’m Walkin’ by playing the drums and singing on an episode of Ozzie and Harriet, Ricky, The Drummer (April 1957). The single reached No.4 on the Billboard charts. He subsequently went on tour playing at various venues in Ohio and Wisconsin.

Ozzie Nelson then negotiated a contract for his son with Imperial Records. Ricky Nelson's first single with the label was Be-Bop Baby which sold more than a million copies and reached No.3 on the charts.

His first album, Ricky was released the same year and reached No.1. During this time he continued appearing on the Ozzie and Harriet Show. He formed a band and recorded Believe What You Say with them (1958).

Assisted by his father and manager, Nelson used television to promote his music. Between 1952 and 1967 Nelson had 30 Top-40 hits. In 1972 he had a hit with Garden Party which went gold.

As the hit records started to dry up, Ricky Nelson turned to act and appeared in various television shows including The Streets of San Francisco (1973), A Hand For Sonny Blue (1977). Films he acted in during his career include The Story of Three Loves (1953), Rio Bravo (1959), Love And Kisses (1965) and The Wackiest Ship in the Army (1961).

The cause of the accident was a mechanical failure which the US National Transportation Safety Board concluded was caused by a heater short-circuiting and igniting. Nelson’s fiance Helen Blair and his band were also on the plane, and no-one survived.

In 1987, Ricky Nelson was posthumously inducted into the Rock and Roll Hall of Fame. The U.S. TV Guide listed him as one of TV’s 25 Greatest Teen Idols in 2005 and Rolling Stone Magazine named him the 91st Greatest Rock ‘n Roll Artist of all time.

Along with his father Ozzie Nelson, he was nominated for the New Jersey Hall of Fame: Performing Arts recognition in 2017.