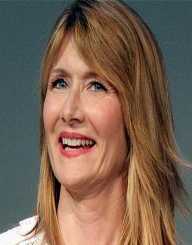 American actress Laura Elizabeth Dern was born on February 10, 1967, in Saint John's Health Center, Santa Monica, Los Angeles County, California, United States of America. She was the great-granddaughter of former Governor of Utah and Secretary of War, George Dern and both her parents were professional actors. Laura had reportedly been conceived while her father, Bruce Dern, and mother, Diane Ladd were shooting for the film ‘The Wild Angels.’ Her parents divorced barely after two years of her birth and Laura was then brought up by her mother and grandmother. She followed the Roman Catholic faith according to her family belief.

Laura Dern’s physical appearance was a bit too different. She almost reached most of her imposing 5’ 10” height even before attending her teens. With a prematurely full hip and thin rail structure, her physical appearance seemed even more awkward with her drooping posture and huge feet. She was teased and bullied by her classmates for her peculiar and abnormal physical appearance while attending schools. At the tender age of 9, she enrolled at the reputable Lee Strasberg Institute and found solace by studying method acting distancing herself from all those banters hurled towards her. She attended the University of Southern California for one semester and the University of California, Los Angeles, for only two days.

Laura Dern was drawn towards acting and movie-making since her early childhood. Her parents’ background also, in a way, accelerated her decision to pursue acting as a career option early in her teens. In 1973, she made her film debut as a child artist in her mother’s film ‘White Lightning.’ She followed it up with a brief appearance in ‘Alice Doesn't Live Here Anymore’ in the following year, in which her mother had a signature role. Laura found her bearing in the 1980 teen movie ‘Foxes.’ She played one of the leading characters of the Adrian Lyne film which also starred Jodie Foster, and her performance was lauded. In 1981, she appeared in a television series called ‘Shannon.’

While doing several bit parts in mainly small movies, Laura Dern landed the role of Jessica McNeil in ‘Ladies and Gentlemen, the Fabulous Stains’ (1982). A controversy broke out between Laura and her mother when her mother objected to her presence on the sets of the said film at such a young age of 13. However, Laura sued for emancipation and promptly received the same ensuring her rights to play the role. She won the Miss Golden Globe Award in 1982 for her performance in the film ‘Ladies and Gentlemen, the Fabulous Stains,’ making her the youngest ever winner of the award. She was next seen in movies like ‘Teachers’ (1984), ‘Mask’ (1985), ‘Smooth Talk’ (1985) and proved her mettle in all of these movies.

Laura Dern appeared in many television movies in small roles during the early part of the 1980s including the likes of ‘Happy Endings’ and ‘The Three Wishes of Billy Grier.’ She teamed up with the legendary director David Lynch in the crime-thriller ‘Blue Velvet’ and played the role of Sandy Williams in 1986. Continuing her association with David Lynch, she portrayed the character of an oversexed 20-year-old on the run in the movie ‘Wild at Heart,’ which almost took four years to be released. She appeared in yet another David Lynch film ‘Inland Empire’ in 2006.

In 1993, Laura Dern was cast as the courageous scientist Dr. Ellie Sattler in Steven Spielberg's 1993 blockbuster film ‘Jurassic Park’ based on the popular book of the same name by Michael Crichton. The film was a huge hit worldwide, and the mainstream audiences well liked Laura for her realistic portrayal of the adored character. In the same year, she had another film called ‘A Perfect World,’ in which the cine-giant Clint Eastwood cast her. In 1996, she appeared in ‘Citizen Ruth,’ the directorial debut of filmmaker Alexander Payne. She portrayed the role of Ruth, a hostile pregnant girl, hurling a deluge of abuses at the top of her voices to her on-screen mother, played by her real mother, Diane Ladd.

From a lumbering and inelegant teenager, Laura Dern developed herself into a supple beauty over the years and has been portraying a wide variety of roles in both films and TV industries and is actively pursuing her acting career to date.

In 1993, Laura Dern won a Golden Globe Award under the category of Best Performance by an Actress in a TV mini-series or motion picture for her performance on HBO's ‘Afterburn.’

In 2009, she again won the Golden Globe Award in the category of Best Actress in a supporting role for her performance in the television movie ‘Recount.’

Laura Dern's third Golden Globe Award came in the year 2012 when she received the award for her performance in the television series ‘Enlightened.’

She won a Primetime Emmy Award under the category of ‘Outstanding Supporting Actress’ in 2017 for her performance in the TV series ‘Big Little Lies.’

Laura Dern married musician Ben Harper on December 23, 2005, after dating for five years. The couple is blessed with a son, Charles and a daughter, Harris. They finalized their divorce in September 2013.