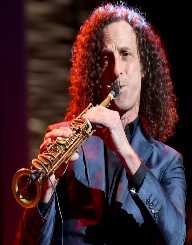 American saxophonist Kenneth Bruce Gorelick (stage name Kenny G) was born on June 5, 1956, in Seattle, Washington. His parents were Jewish, and Kenny grew up in the Seward Park neighborhood which is the center of the Seattle’s Jewish community. Kenny G first became interested in playing saxophone when he heard a performance on the Ed Sullivan Show when he was still a kid. He started to play the instrument in 1966 with his saxophone Buffet Crampon alto.

Gorelic attended the Franklin High School in Seattle. He tried to join a jazz band, but he was refused the first year. The following year, Kenny G was taken in the band as the first chair. Besides playing saxophone, he also made private lessons for saxophone and clarinet. After finishing High School, Kenny went to study at the University of Washington.

Kenny G’s first job was for the Barry White’s Love Unlimited Orchestra as a sideman. He was at the time 17 years old and still studying in high school. He continued to play, while he was in University.

In 1982, Kenny G signed records deal with Arista Records. He was noticed by the label’s president Clive Davis when Kenny performed ABBA’s Dancing Queen. The same year he released his first album, which received good reviews from the critics. His second and third albums were also successful - the G-Force and Gravity achieved platinum status.

In 1985, he released his studio album Duotones which was his most significant success at the time. Singles from the album, such as “Love on the Rise” and “Songbird” reached high positions in US charts and the album has sold = more than 5 million copies in the US.

Kenny G started writing music for several Hollywood projects. He worked on soundtracks for films such as Dying Young, The Bodyguard, featuring Kevin Costner and Whitney Houston. In the Bodyguard, Kenny G performed his song “Waiting For You,” as well as Houston’s single “Even If My Heart Would Break.”

In 1997, Kenny G earned his place in the Guinness Book of World Records, by playing the most extensive note recorded on a saxophone. By using circular breathing, he held E-Flat for 45 minutes and 47 seconds. His second Christmas album became the 1998’s best-selling holiday album by selling 2 million copies.

Kenny G’s 9th studio album included collaborations with David Sanborn, Barbara Streisand and Daryl Hall. His following album called I’m in the Mood for Love…The Most Romantic Melodies of All Time. The album featured renditions of love songs from The Beatles, Secret Garden and theme song of Romeo and Juliet.

Kenny G released his 14th studio album Brazilian Nights in 2014 and went on a tour to promote it. He has been influenced by R&B and collaborated with Robin Thicke and Babyface. Kenny G has also been featured in Super Bowl XLV ad for Audi, as well as Katy Parry’s video for single “Last Friday Night.”

He has also been majorly popular in Hong Kong and China. Kenny G has recorded several Chinese songs. His biggest hit in China has been “Going Home” from the Kenny G Live album of 1989. It has become an unofficial business hour closing song, playing it in markets, shopping malls, and train stations.

Kenny G plays a Selmer Mark VI saxophone, but he has also created his line of saxophones - The Kenny G Saxophones. In 1992 he married Lyndie Benson. The couple had two sons. In 2012, Benson filed for divorce.

While still at school, Kenny G took up playing golf. He still plays regularly and has even participated in the AT&T Pebble Beach National Pro-Am tournament seven times. He is also an aircraft pilot and owns a De Havilland Beaver plane.