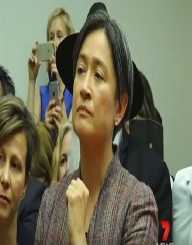 Penelope  Wong was born on 5th November 1968, to Francis and Jane Wong. She was born in Kota Kinabalu, Malaysia. She had a younger brother named Toby.

Penelope Wong’s parents divorced when she was eight years old, and she moved to Australia with her mother and brother. They settled in Adelaide, in the state of South Australia. Penelope  Wong attended Coromandel Valley Primary School and then won a scholarship to study at Scotch College, in Adelaide.

She initially studied chemistry, physics, and mathematics. Penelope  Wong was accepted into a double degree at the University of Adelaide, in medicine and Surgery. She discovered shortly after, though, that she couldn’t bear the blood, so she switched to law.

Penelope  Wong graduated with a double degree – Bachelor of Arts in Jurisprudence, and a Bachelor of Law with Honors. In 1993, Wong was admitted to the South Australian Bar.

During her years at university, Penelope Wong was involved in various left-wing activities politically. She was part of the leadership of the Adelaide University Labor Club and has also been a delegate of the South Australian Labor Party State Convention almost every year since 1989. Wong also did part-time work for the Construction, Forestry, Mining, and Energy Union (CFMEU) which is a very leftist, almost militant union in Australia.

In 1992, upon graduation, Penelope Wong worked as an industrial officer for the CFMEU. Her association with the CFMEU continued for several years, and in 1995 and 1996 she worked in an advisory capacity with them, as well as to the New South Wales State Government, which had just been elected at the time.

Penelope Wong returned to Adelaide, and from 1996 to 1999 practiced law for a private firm. In 1999, she was appointed Legal Officer for the Liquor, Hospitality and Miscellaneous Union. She remained there until 2002.

During that period, she also won a position on the Australian Labor Party’s (ALP) state executive.

In 2001, Penelope Wong ran for pre-selection for the Senate and won. Her term began in July 2002.

In 2005, Penelope Wong was elevated to the position of Shadow Minister (in Opposition) for Employment and Workforce Participation, and Shadow Minister for Corporate Governance and Responsibility.

These portfolios changed slightly in 2006 when the ALP cabinet reshuffled. She retained the Shadow Ministry for Corporate Governance and Responsibility, and her other portfolio had a name change to Workforce Participation. She picked up a third portfolio, Shadow Minister for Public Administration and Accountability.

The ALP won power in the 2007 Australian elections, and Wong was appointed Minister for Climate Change and Water.

In 2010, after a leadership coup, Wong was then promoted to be Minister for Finance and Deregulation.

Penelope  Wong is openly gay, and along with her partner, Sophie Allouache, has two children, both girls.