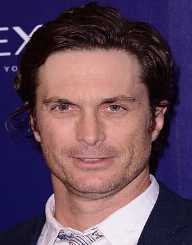 Oliver Hudson is an American actor and producer known for playing the role Adam Rhodes in the popular CBS musical series Rules of Engagement from 2007 to 2013. Born on September 7, 1976, he made an acting debut in 1999 playing the role of Alan Clark in the comedy film The Out-of-Towners. He has since played a role in numerous films, and television works includingJeff Fordham in the ABC drama series Nashville from 2013 to 15 and as Wes Gardner in Scream Queens. Hudson’s latest work is in the ABC sitcom Sitting Up Together.

Oliver Hudson was born on September 7, 1976, in Los Angeles to actress Goldie Hawn and singer Bill Hudson. His biological sister is actress Kate Hudson and has for half-siblings, Emily and Zachary, Lalania and Wyatt. His parents divorced in 1980, and therefore, he was his sister were raised by their mother and stepfather Kurt Russel in Colorado. Raised in the Jewish faith, Oliver Hudson is of English, Italian, Hungarian-Jewish, and German descent.

In an interview with People magazine in 2002, his mother told revealed that he "was an old soul. He had the wisest eyes; they just looked through you." Growing up Oliver Hudson had the passion for playing hockey but also fell in love with acting. He studied film at the University of Colorado.

As a fresh college graduate Oliver Hudson moved to Los Angeles where he worked as a production assistant on the set of Executive Decision in 1996. With his passion for acting, he started going for auditions. He played minor roles in movies like The Out of Towners in 1999 and The Smokers in the Smokers, 2000, Going Greek, 2001 and New Best Friend, 2002. That same year he had a role in the television series My Guide to Becoming a Rock Star playing as Jace Darnell. This was soon followed by the recurring role as Eddie Doling in Dawson’s Creek from 2002 to 2003. From 2004 to 2005 he played in The WB series The Mountains but was canceled after the third episode. Hudson has also starred in films like Black Christmas, The Breed, all in 2006 and Carolina Moon in 2007. Hudson biggest role was in the CBS sitcom Rules of Engagement from 2007 to 2013. After Rules of Engagement, he had a recurring role on the ABC series Nashville. He was also a regular cast on the horror series Scream Queens in 2015.

Oliver Hudson is married to actress Erinn Bartlett since June 9, 2006. They married in Cabo San Lucas in Mexico. The couple had been dating since 2002. They have two sons Wilder Brooks and Bodhi Hawn, and a daughter, Rio Laura.