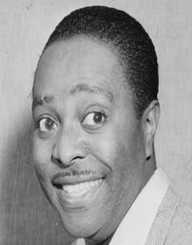 Louis Thomas Jordan was born on 8th July 1908, to James and Adell Jordan. He was born in Brinkley, Arkansas, in the United States. His mother died when he was very young. His father was a music teacher, and he was a bandleader for two bands, the Brinkley Brass Brand and the Rabbit Foot Minstrels.

Jordan’s father taught him music. He started with the clarinet, but also learned the piano and the alto saxophone, which would become his main instrument. He used to play in his father’s bands after hours.

Louis Jordan studied at Arkansas Baptist College where he majored in music.

Louis Jordan played in several local bands before moving to Philadelphia for a while, then New York. In 1932, he started playing with the Clarence Williams band.

In 1936 he joined the Savoy Ballroom orchestra in New York. It was one of the most influential bands at the time, led by Chick Webb. Jordan was with the orchestra for two years, until Webb fired him for trying to poach musicians and singers for his band.

Jordan’s first band started with nine members, but he pared it down to six when he managed to get a residency at the Elks Rendezvous Club in Harlem. Their first recording was in 1938, with Decca Records. Further records took place in 1939 and 1940.

In 1941, he signed with the General Artists Corporation to manage his interests. His agent was Berle Adams. Adams got Jordan and his group a gig at the Capitol Lounge in Chicago, and this became a breakthrough for the group. In the same year, Decca Records established their Sepia Series. This featured artists on their label that they considered had potential to appeal to either black or white markets. They placed Louis Jordan's band on the list.

Jordan and his band continued to record and perform successfully, and when there was union trouble in 1942 by the American Federation of Musicians that kept musicians including Jordan out of the recording studio, it didn’t matter, because Decca had a stockpile of recordings that they were able to release.

Towards the end of 1942, Louis Jordan and his band moved to Los Angeles, where they worked at major venues. Jordan was back in the studio in 1943 as Decca agreed with the union. One of the first songs he recorded was Ration Blues, which would become his first “crossover” hit into the white market.

The success of his band was apparent in the fees they were able to charge for performing. They went from earning $350 per night, to $2,000 per night. The other advantage they had was that their music was just as popular and successful as the larger bands, but there were only six of them.

The 1940s were hugely successful for Jordan. He released dozens of songs and had great commercial success, appearing in movies as well. Some of the movies he performed in were Follow the Boys (1944) and Look-Out Sister (1947).

In 1951, as the popularity of big bands began to decline, so did Jordan’s success. In the mid-1950’s he left Decca Records and went to Aladdin Records. From there he went to X Records, and in 1956, he signed with Mercury Records.

Among his awards, Louis Jordan was inducted into the Rock and Roll Hall of Fame.

Louis Jordan's first marriage didn’t last long, and in 1932, he married for a second time, to Ida Fields. She was a singer and dancer. The couple divorced after a short time.

In 1942 he married Fleecie Moore, but they, too, divorced. Jordan’s fourth marriage was to Vicky Hayes, a dancer, in 1951. They divorced in 1960. His fifth marriage was to Martha Weaver in 1966. Weaver was also a singer and dancer.