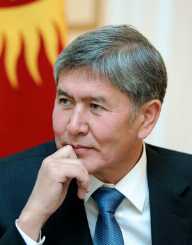 Almazbek Atambayev is a political leader and the current President of Kyrgyzstan. He has held this position since 2011 and worked extensively to improve his countries bilateral ties with other nations. His early career was that of an influential businessman who later entered into politics. He has a wide portfolio ranging from tourism and trade to industry. Before becoming the President, Atambayev was also the Prime Minister of Kyrgyzstan for nearly a year.

The most remarkable feat achieved under him is the improvement in Kyrgyzstan’s foreign trade and income. His government is also known to be largely corruption-free.

Explicit details of Atambayev’s childhood are not available publicly. He was born on September 17, 1956. His star sign is Virgo, and his birthplace is Arashan, Kyrgyzstan. He holds a degree in economics which he earned from the Moscow Institute of Management.

Atambayev didn’t start his career in politics. Instead, after he completed his education, he entered into the publishing business. His business did quite well, and he became known as an influential businessman. Shortly after that, he decided to enter politics. He worked for the Supreme Council of the Kyrgyz SSR and played a crucial role in the founding of the Social Democratic Party in 1999. He became its chairman. His political career didn’t start on a high, however, and he didn’t receive popular support in the elections. After working for the people for nearly six years, the opinion towards his party became more favorable and he was appointed as the Minister of Industry, trade, and tourism in 2005.

In 2006, Atambayev was one of the leaders in a protest against the then corrupt government. After the Prime Minister resigned, Atambayev was appointed to act as the PM till further elections. He became the first Prime Minister from the opposition following this sequence of events. Atambayev resigned from the post of the PM in 2007, and one year later, he was chosen to be the head of the United People’s Movement. In 2010, he was elected to be the Prime Minister of Kyrgyzstan once again in a coalition government. Finally, in October 2011, Atambayev was elected as the President of Kyrgyzstan with a huge majority of votes in his favor. He still holds this position as of 2017.

Under Atambayev Kyrgyzstan’s international trade relations have improved a great deal due to new trade ties he built with several different countries. One of the significant steps that he took was to improve bilateral relations with Turkey and attract foreign investment worth billions of dollars.

Atambayev has also opened talks with Russia – the chief European power in the area.

Atambayev has married twice in his life. His first wife was Buazhar, and they had four children together – two sons and two daughters. They divorced each other after a long marriage. In 1988, Atambayev married again, this time to an ethnic doctor named Raisa. With her, he has produced two kids – one boy and a girl.