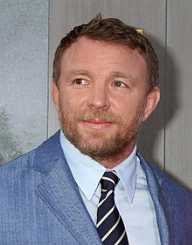 Famed English filmmaker, Guy Ritchie, was born on September 10, 1968 in Hatfield, Hertfordshire, England. He was the second child, at the time, born to the couple of John Vivian and Amber Ritchie. John was a retired British Infantry member while Guy's mother worked in advertisement field. His older sister’s name is Tabitha. However, he did have a half brother named Kevin Baynton that his mother Amber had given up for adoption in her teenage years.

Guy's Childhood was not without struggles. His parents divorced and individually remarried with other partners at some point in the early years of his youth. Additionally, he was diagnosed with full on dyslexia very early on and even had to attend a school that supported the disorder. This affected not only his studies but his everyday life.

A rude awakening came during his sophomore year of high school. Guy was caught doing drugs by his school, Stanbridge Earls School. This, in combination with other things, led to him getting kicked out.

Before he was able to find the career path that he is on today, Guy jumped around from job to job making odd in money. It wasn't until his mid twenties that he finally started seeping into his future career path.

Through a close friend, he gained a low level assistant position in a media company that dealt mostly with music video, advertisements, and other videos on variating subjects. At the time, he did not realize that this simple position would lead to the  start of his successful film career.

In 1995, his first film, “The Hard Case,” was released. The film was less than an half of an hour long in length. However, it received extremely well reviews from critics and gained a lot of popularity.

Ritchie's goal at the time was to produce a full length film though. The only thing stopping him was the lack of resources. Luckily, as a result of the success from his first short film, he was able to gain some support from people like Trudie Styler. Trudie had view a showing of “The Hard Case” not long ago and was extremely impressed. Because of this, she ended up being one of the leading initial investors towards his first film. Additional support was gained from family friend Peter Morton, from the Hard Rock Café and friend of his fathers,  and his nephew Matthew Vaughn. Ritchie's first film proposal and draft was sent to both, and they liked the idea so much that they decided to work with him on it.

Finally, in 1998 Ritchie released his film Lock, "Stock, and Two Smoking Barrels" to British audiences. The film is about a card player going big to pay his debts off with a big time gang by getting a group of guys together to rob another gang's stash. The film ended up going big itself. Becoming a new poster in the crime genre, it was such a success that it ended up being released internationally and became a hit even in the United States.

The positive reception of his first feature length film set him on a much easier and lucrative path through Hollywood. Of the same genre, his latest movie "Snatch" was released in 2000. The resources were significantly better in terms of both quality and quantity for Guy when creating this work. Even actors like Brad Pitt, Jason Statham, and Benicio del Toro became part of the main cast. Both critics and user reviews of the film were great and, like his first film, it became a widespread known success.

At this point in his career, Ritchie's ball of success and growing fame had really begun to roll. His works ranged from small to big. He even directed a music video for his wife, Madonna in "What It Feels Like For a Girl." The video had mixed reviews.

However, not all of his works were perfect. The 2002 film "Swept Away," in which he also directed his wife in, failed miserably with critics and in the box office. This film was different from what Ritchie had usually directed as it was a Romantic Comedy of sorts. And he took another hit in 2005 with "Revolver" starring Jason Statham.

Three years later, he created yet another British crime genre movie with "Rock n' Rolla" starring Gerard Butler. The movie found great popularity, especially in Britain. Additionally, the reception was so good that it was planned to become the first of three supporting films making a trilogy.

The next year brought about what can be best considered Guy's most successful and popular film, Sherlock Homes. The film starred Robert Downey Jr. and Jude law and was based on the original story with a new age sort of twists and styles. The film ended up bringing in well over half of a billion dollars of success at the box office. Immediately after the success, a sequel titled "Sherlock Holmes: Game of Shadows" was planned and released in 2011. The sequel did not have as good of a success as the first film, but it was by no means a failure and received a solid reception from those that watched it.

In 2013, Warner Bros went to Guy to get him to direct "The Man from U.N.C.L.E." The film was a solid success, and he was approached again a couple of years later to direct the upcoming recent incarnation of King Arthur in "King Arthur: Legend of The Sword" starring Charlie Hunnam.

Introduced through friends and fellow colleagues, Guy Ritchie and Madonna started seeing each other in 1998. A little under two years later, they had a son named Rocco John Ritchie and shortly thereafter said their vows with marriage. The married couple adopted another boy in 2006. However, their relationship was ended that year also for vague reasons.

Currently, Ritchie is married to the model Jacqui Ainsley. They have three kids together. In 2011, they had a son Rafael, then a daughter Rivka in 2012, and most recently another son named Levi. It is said that Guy avidly spends time in all of his children's lives including the ones from Madonna.

Overall, Guy Ritchie's works have received generally favorable reviews. "Swept Away" and "Revolver" fell short with scores lower than twenty percent on Rotten Tomatoes. However, all of his other works to date have been over sixty percent in positive favor. As of today, Guy Ritchie is considered one of the most successful up and coming directors and filmmakers. Even his earliest film, “Long, Stock, and Two Smoking Barrels,” nominated him for “Best British Director,” “Best Original Screenplay,” and “Best British film” from BAFTA and British Independent Award Films. It went on to actually win him the “Best New Film Maker” award from MTV and a few different “Best Director” awards. Guy Ritchie was also nominated from “Best Director” for “Sherlock Holmes” and won the “Best Director” for “Snatch.” His flop film, “Swept Away,” won “Worst Director” and was nominated for “Worst Screenplay”.