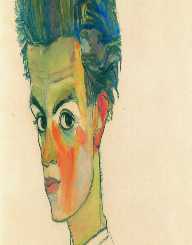 Egon Schiele was an Austrian painter and one of the foremost figurative painters of the early 20th century and one of the proponents of Expressionism. Born on June 12, 1890, his works were mostly characterised by drawings of the nudity of models and himself. Influenced by the works of Gustav Klimt, he was known for detailed works instead of beautification. He mostly came under intense criticisms for the sexual undertone of his works but considered masterpieces today. He contracted Spanish flu and died only three days after his wife died.

Egon Schiele was born on June 12, 1890, in Tulln, Lower Austria to Adolf Schile and Marie, née Soukup. His father worked with the Austrian State Railways as a stationmaster of Tulln station. With his father working at a train station, he became enthused with trains and started drawing trains at a young age. His father being opposed with this had to burn his sketchbooks. People around him saw him as a strange child, shy and reserved.

Egon Schiele received secondary education in Krems and later in Klosterneuburg at age 11. He was not academically good and only did well in athletics and drawing. At the age of 15 years, his father died and was left in the care of his maternal uncle, Leopard Czihaczek. Although Czihaczekinitially wanted Egon Schiele to concentrate on academics, he found out that his interest was in drawing and therefore allowed him to pursue it. He hired him a tutor, artist Ludwig Karl Strauch.

Egon Schiele earned admission at the Kunstgewerbeschule (School of Arts and Craft) in Vienna in 1906. After a year, he moved to Akademie der Bildenden Kunste in Vienna. However, he left the academy after three years of studies, feeling frustrated with the progressive style of teaching especially by the painter Christian Griepenkerl.

Mentoring Under Klimt And Career Early

Egon Schiele understudied Gustav Klimt starting from 1907. Klimt was fond of him and helped him throughout his mentoring to the extent of buying some of his drawings, introduced him to patrons and arranged models for him. As a protégé of Klimt, most of his early works between 1907 to 1909, semblances those of Klimt and Kokoschka and influenced by Art Nouveau. He later developed his style. He had his first exhibition in Klosterneuburg in 1908.

After leaving the Akademie der BildendenKunste in 1909, Egon Schiele founded the Neukunstgruppe (New Art Group) alongside other aggrieved students. That same year, he exhibited some of his works at Vienna Kunstschau on the invitation of Klimt. He explored both human forms and sexuality for most of his works from this period. He also did some still lives, landscapes and painted tributes to Van Gogh’s Sunflowers. In 1910, he painted Egon Schiele’s Kneeling Nude with Raised Hands (1910), considered one of the major nude pieces made in the 20th century. However, it was deemed to be unconventional, and its explicitness raised concerns in the art circles since it was against the strict academic rules.

Egon Schiele did his first solo exhibition in 1913 at the Galerie Hans Goltz and another in Paris the following year. In 1915, he painted Death and the Maiden, as he felt abandoned by his long-term model and girlfriend, Wally, who left him after he got married to Edith. Three days after his marriage, he was drafted in the army for active service during the World War I. He initially stationed in Prague. His duty in the service was guarding and escorting Russian prisoners. He later served as a clerk in a POW camp near Muhling. During this period, his painting became more detailed and wide ranged.

Egon Schiele experimented with the themes of motherhood and family and made linear drawings of military officers and war scenes. He exhibited in Berlin, Zurich, Prague, and Dresden. He was discharged in 1917, and back in Vienna, he continued on his painting career. In 1918, he exhibited his works at the Secession's 49th exhibition, in Vienna. He achieved great success with this exhibition as prices of his works went high and earned more commission works.

Egon Schiele had a relationship with Walburga (Wally) Neuzil, who also served as his model. The two spent time together moving from one place to the other. He married Edith Harms in 1915 but still wanted to keep his relationship with Wally. However, Wally left and never saw him again. In 1918, during the Spanish flu epidemic, over 20,000,000 Europeans lost their lives including Edith who was at the time six months pregnant. Schiele also died on October 31, 1918, three days after his wife. He was 28 years old.