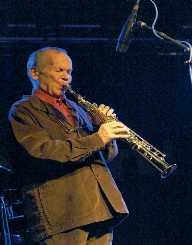 Steve Lacy was born on July 23rd, in 1934. As a saxophone player, he rose to become a highly influential figure with his exceptional playing skills during the 1950s and in 1960s.

Steven Norman Lackritz alias Steve Lacy was born on July 23rd, in 1934. His place of birth was in the New York City. At the age of sixteen, he began his music career. During this period, he was playing Dixieland music alongside other notable musicians at the time such as Pee Wee, Zutty Singleton, Henry Allen, and several others.

Steve Lacy formed a lasting relationship with Thelonious Monk, a pianist where together they recorded a number of compositions. In 1960, he also spent some time playing in the band that Monk had just established.

During his music career, Lacy majored on soprano saxophone which earned him immense fame during the 1950s and in 1960s.

In August 2003, Steve Lacy was diagnosed with cancer. However, this did not hinder him from focusing on his talent. He breathed last on June 4th, 2004. He passed away at the age of 69.