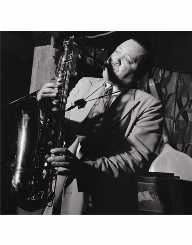 Lester Willis Young was born 27th August 1909, in Woodville, Mississippi, in the United States. Young was exposed to music from a young age, with his father being a band leader, and his brother, a drummer. By the time he was ten, Young could play several instruments including the trumpet, violin, and drums.

The Young Family Band, including Young, toured the regional areas of the Southwest, playing in carnivals. Young didn’t get on with his father and often left home for periods of time to get away from the unrest.

In 1927, Young left the family band. He refused to tour in the South where racial segregation was required in public areas. He instead joined the Bostonians and chose tenor saxophone as his instrument of choice.

In 1932, Young left home to become a member of the Blue Devils, led by Walter Page.

In 1933, Young moved to Kansas City. He played in several bands but found a good fit with the Count Basie Orchestra, and before long he had come to the forefront with his talent being noticed.

Young then left Count Basie and joined Fletcher Henderson’s orchestra. After a short while he joined the Andy Kirk band, but after six months he returned to Count Basie.

In 1938, Young and some other members of the band did some recordings for Commodore Records, called, The Kansas City Sessions. He played clarinet as well for the recordings and did clarinet work over the next couple of years for Billie Holiday, Glenn Hardman, and Basie. His clarinet was stolen in 1939, so he didn’t play it again for many years until he was gifted one in 1957.

Young left Basie in 1940. He did some studio sessions with Billie Holiday from 1937 to 1941, and in 1942 he did some recordings with Nat King Cole. He also played in several smaller bands during this period, quite often with his brother on drums.

In late 1943, Young once again joined Count Basie. He was with them for 10 months before being drafted into the army for World War II.

Young was drafted in September 1944, along with Jo Jones, a fellow musician. Many white musicians that were drafted were put into bands led by bandleaders like Glenn Miller and Artie Shaw. Young, however, was enlisted into regular service and was not allowed to play his saxophone.

After being found with marijuana and alcohol, Young was court-martialed and spent 12 months in a detention barracks. In 1945 he was dishonorably discharged.

Young’s career was back on track after the war, better than ever before. He joined the Jazz at the Philharmonic (JATP), led by Norman Granz, in 1946. He toured regularly with them until 1958.

During this same period, Young also did many studio recordings. He did more recordings with Nat King Cole, recorded for Aladdin Records, and for Savoy Records.

The quality of Young’s playing started to decline in the early 1950s as his intake of alcohol increased. He had a nervous breakdown in 1955 and was hospitalized. He was much better when he was released, and in 1956, Young recorded two sessions. One of these was a reunion with some of his old band members.

He also toured Europe with Miles Davis, and then had a regular gig in Washington, D.C., at the Patio Lounge as part of the Bill Potts Trio.

In December 1957, Young was on a television special called, The Sound of Jazz, with fellow singers and musicians such as Billie Holiday, Ben Webster, Roy Eldridge, and Gerry Mulligan.

In March 1959, Young did his last studio recordings. It was at the end of a European tour, and his alcoholism had taken over.

In 1981, Charles F. Gordon released a book based on Young’s life. The book was called, The Resurrection of Lady Lester, and it was turned into a stage production as well later that year.

Lester did 12 recordings for Norgran Records as the leader, 13 for Verve Records, and five with Charlie Parker. He also did four with Pablo Records. There were four compilations with Lester as leader.

He played in at least eight recordings as a sideman, with performers such as the Count Basie Orchestra, Billie Holiday, and the Jazz at the Philharmonic.