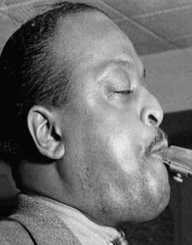 Ben Webster studied violin and also taught himself to play the piano. Pete Johnson lived close by, and this inspired Webster to learn to play blues music. By 1927, Webster was playing music for silent films in Kansas City. He left Kansas City and joined a band then moved to Amarillo, Texas where he again earned money playing for silent films. Around this time, he was introduced to Budd Johnson who taught him the rudiments of the saxophone.

Ben Webster joined Gene Coy’s Happy Black Aces, and Coy taught him the tenor saxophone. He played with Jap Allen’s band as well as Blanche Calloway’s band before joining Bennie Moten’s band. He recorded with Moten’s band in 1932. He then returned to Kansas City and joined Andy Kirk. In June 1934, he was in New York as part of Fletcher Henderson’s orchestra. He played with Benny Carter in the mid-1930s, then in July 1937, rejoined Henderson until 1938.

Returning to New York, he played with Stuff Smith and Roy Eldridge where he took part took place in various recording sessions. He also joined Teddy Wilson’s big band as a soloist. Webster than had a breakthrough when he was offered a position in Duke Ellington’s orchestra (1940). His first gig with Ellington was in Boston. He spent three years with Ellington and became well-known, on a national as well as international level, through recordings such as Cotton Tail, Jack the Bear, Harlem Air Shaft and Sepia Panorama.

After this three years with Ellington, Ben Webster played with various groups and small ensembles. He rejoined Ellington in 1948-1949 then returned to Kansas City where he played with Bob Wilson, Jay McShann and Bus Morton. During the 1950s. Webster divided his time playing, touring and recording with his groups and various soloists in Los Angeles and New York. Singers he worked with include: Jimmy Witherspoon, Billie Holiday, Ella Fitzgerland, Frank Sinatra, Joe Williams, and Carmen McRae.

When he toured with Norman Granz’s Jazz at the Philharmonic in 1953/1954, Granz helped Webster obtain a recording contract and albums such as King of the Tenors (1953) and Ben Webster Meets Oscar Peterson (1959) followed. In 1958, Webster was part of the CBS television show The Sound of Jazz where he played alongside Count Basie, Billie Holiday, Coleman Hawkins and Lester Young.

In 1964, Ben Webster was invited to play in Ronnie Scott’s Club in London and left the United States for the United Kingdon. After a successful month in England, he went to Scandinavia where he played in Stockholm, Sweden; Copenhagen, Denmark and Oslo, Sweden. He then lived in Amsterdam (1966-1969) and eventually settled in Copenhagen, Denmark. He toured Europe frequently where he played at festivals and clubs.

The Ben Webster Foundation was created after Webster’s death in 1973. The trust is a beneficial non-profit organisation which uses Webster’s royalties to support young musicians in the United States and Denmark. The trust also awards an annual prize, the Ben Webster Prize, to promising young musicians. His memorabilia and private jazz recordings are held at the University Library of South Denmark in Odense.

Ben Webster died on the 20 September 1973, following an aneurysm he suffered after a concert in Amsterdam. His ashed are buried in Assistens Cemetery in Copenhagen, Denmark.