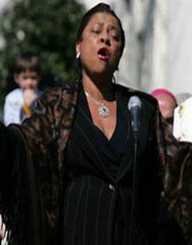 Kathleen Deanna Battle was born 13th August 1948, in Portsmouth, Ohio, in the United States. Battle’s father was a steelworker, and her mother was in the choir at their church. Battle came from a large family with six older siblings.

Battle studied at Portsmouth High School and then was awarded a scholarship to the University of Cincinnati College-Conservatory of Music. After she earned her degree in music, Battle later achieved her master’s degree in Music Education.

In 1971, Kathleen Battle started teaching fifth and sixth-grade music in one of the public schools in Cincinnati. At the same time, she continued to study voice.

In 1972, one of her friends told her that the conductor Thomas Schippers would be auditioning in Cincinnati. Battle was hired on the spot to sing as the soprano soloist at the 1972 Festival dei Due Mondi in Italy. She performed on 9th July 1972, and this was the debut of her professional career. She did several more orchestral concerts during 1972, and in 1973 she received a grant from the Martha Baird Rockefeller Fund for Music to enable her to continue performing.

Through Schippers, Kathleen Battle was introduced to James Levine, another conductor, who hired Battle to perform at the Cincinnati Symphony Orchestra’s May Festival in 1974.

Her opera debut was in 1975 with the Michigan Opera Theatre in Detroit. She played the part of Rosina in The Barber of Seville. In 1976 she debuted at the New York City Opera, playing the role of Susanna in The Marriage of Figaro. In 1977, she debuted at the San Francisco Opera, followed by her debut in the UK in 1979.

During the 1980s, Kathleen Battle performed all over the world in recitals, opera, and choral works. These included the part of Adina in Lélisirdámore and functioning as the soprano soloist in Mozart’s Coronation Mass at St. Peter’s Basilica in the Vatican. She continued her performing into the 1990s. She took on a concert program, recorded a CD and continued to appear in operas and other productions.

Unfortunately, her relationship with the management of the Metropolitan Opera became strained in the early 1990s. As her popularity grew, she became more difficult to deal with, and in February 1994, she was dismissed from production for unprofessional conduct that was affecting all the other performers. She didn’t perform in opera again.

Kathleen Battle changed her focus to the recording studio and performing in concert. Over the next few years, she released several albums and did various performances. In the 2000s, she continued to perform programs in multiple locations including Greece, and several around the U.S. including Ravinia and Aspen. She also performed with major artists such as Alicia Keys and Queen Latifah.

Battle has done many recordings, including, 17 choral and symphonic, and 14 full operas. She has also done approximately 25 records that include recitals, concerts and song collections.

Among her awards and honors, Kathleen Battle has five Grammy Awards and an Emmy Award. She has also been the recipient of six honorary doctorates from different universities in the U.S.