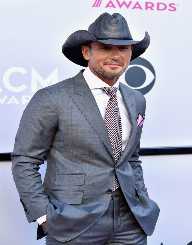 Samuel Timothy McGraw best known as Tim McGraw is an American actor, singer, and songwriter. Born on May 1, 1967, he started his music career as a neotraditional country singer in 1990 and later switched to country pop in the late 1990’s. This made him of the first male Country singers to take such decision. His first pop song was Everywhere in 1997 and has since then released several studio albums. Out of the fourteen albums, ten have made it to number one on the Top Country Albums charts.

McGraw’s breakthrough album was Not a Moment Too Soon in 1994 which became the top country album that year. He made an acting debut in 1997 in an episode of The Jeff Foxworthy Show and later in films like The Blind Side, Friday Night Lights, For Christmases and Country Strong. He has won several awards including ten Academy of Country Music Awards, three Grammy Awards and ten American Music Awards.

Samuel Timothy McGraw was born on May 1, 1967, in Delhi, Louisiana to Elizabeth Ann D’Agostino and Frank Edwin McGraw Jr. His father was a star pitcher for New York Mets and Philadelphia Phillies and his mother a waitress. Elizabeth did not marry Frank, and for about 11 years Tim McGraw thought his stepfather Horace Smith was his real dad and had his surname at a time. He later found out his true identity when he chanced on his birth certificate while searching through his mother’s closet and she would later confirm Tug McGraw was his father.

Elizabeth then introduced him to his Tug who never accepted the responsibility of Tim Mcgraw until he was 18 years. Growing up McGraw was involved in sporting activities including baseball and became a member of the FFA. After his high school education, he enrolled at the Northeast Louisiana University on a sports scholarship where he was also involved in sports. While there he was a member of the Pi Kappa Alpha group. Tim Mcgraw sports dream shattered when he sustained a knee injury during a baseball game and later dropped out of school. In 1987, he followed his mother to Jacksonville, Florida where he enrolled in the Florida Community College but dropped out in 1989. McGraw then left for Nashville to pursue music.

One year after dropping out of school and moving to Nashville, Tim Mcgraw did a demo and gave a copy to his father Tug. The demo was heard by a man who had links with the Curb Record executive and subsequently requested that Curbcontacts McGraw. Curb finally contacted McGraw some weeks later, and after playing his tape to the executives, he got a recording contract in 1990. This led to his first single What Room Was the Holiday In on March 29, 1991. The single could not chart on the Billboard. Unperturbed Tim Mcgraw then releases three singles from his debut album Tim McGraw including, Welcome to the Club, Memory Lane, and Two Steppin' Mind. This time too, none made it to the Top 40.His music fortunes, however, changed with the release of his second album Not a Moment Too Soon in 1994.

The album became very successful and became the best-selling country album that year. The first single on the album Indian Outlaw generated controversies which resulted in getting less airplay. Nonetheless, these controversies made the song famous and increased sales. It also made it to number 15 on the Billboard Hot 100 and first to chart in the top 10 country single. Don’t Take the Girl which was his second single also gained popularity becoming his first to number one country hit and made it to number 17 on the Hot 100.

The album made a total sale of over 6 million and won him the Academy of Country Music Award for Album of the Year and Top New Vocalist. The success of the Not a Moment Too Soon album led to McGraw’s second album All I Want in 1995. The album could not meet the match the success of the previous as it sold 2 million copies, however, made it to number 5 on the Billboard 200. To promote the album, he embarked on The Spontaneous Combustion Tour with his future wife Faith Hills in 1996 as supporting act.

With lots of successes chalked by previous albums, Tim Mcgraw continued to deliver quality works and there came the Everywhere album in 1997. Just like the other, it became successful making over four million copies sales and charting number 2 on the album charts and winning the Album of the Year by the Country Music Association. Singles on the album including It’s Your Love gained two nominations at the Grammy. McGraw other albums include A Place in the Sun, Greatest Hits, Set This Circus Down, Tim McGraw and the Dance Doctors, Live Like You Were Dying and Let It Go and has released several hit singles.

Tim Mcgraw made an acting debut in 1997 in an episode of The Jeff Foxworthy Show playing the role of the rival of Foxworthy. He played other roles and in 2004 appeared in Black Cloud as a sheriff. He, however, gained popularity and praise with the football drama Friday Night Lights which grossed $60 million at the box office worldwide. Two years later, he had a debut lead roleplaying Rob, in Flicka, an adaptation of the book My Friend Flicka.

The film was successful commercially grossing $25 million at the box office, and his performance received positive reviews. In 2007, he had a small role in The Kingdom as a widower who lost his wife in a terrorist attack.  His other film roles include The Blind Side, 2009, Dirty Girl and Country Strong.McGraw most recent film is in Tomorrowland in which he played Eddie Newton.

In 1996, Tim McGraw got married to singer Faith Hill. The couple has since been blessed with three children, Gracie Katherine, Maggie Elizabeth and Audrey Caroline. He holds a private pilot license and has a single-engine Cirrus SR22. McGraw is a Democrat and dream of holding a public office as a Senate or Governor of Tennessee shortly.

Tim McGraw has been involved in several philanthropic works since he came to stardom. In 1994, he set up the Swanpstockwhich used softball game to raise funds for little league programs. The event now includes celebrity softball game and concerts by multiple artists. He was able to raise about $100,000 for the Country Music Foundation Hall of Fame and Museum by hosting the annual New Year’s Eve concert in Nashville from 1996 to 1999.

After the Hurricane Katrina which left many in disarray, Tim McGraw and Faith Hills aided in getting supplies victims to Gulfport, Mississippi and subsequently hosted charity concerts raise funds for victims. They later set up the Neighbour’s Keeper Foundation which was aimed to raise funds for community charities to also lend basic humanitarian service to victims when there is a natural disaster. He is a member of the National Celebrity Cabinet of the American Red Cross and has been involved in several other charity works.

Tim McGraw has won several awards including ten Academy of Country Music Awards, three Grammy Awards and ten American Music Awards. He has been honored with a star on the Hollywood Walk of Fame at 6901 Hollywood Boulevard.