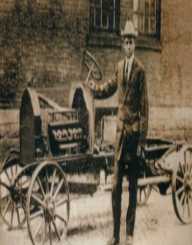 Born in 1871, Frederick Douglass Patterson entered into the world in Greenfield, Ohio. His father Charles Richard Patterson, was born a slave, ran away prior to the start of the Civil War.  He ended up in Greenfield, Ohio, where he obtained a job and found love. He married a white woman (some say biracial) named Josephine Utz. The two had five children. The other four children were: Samuel, Mary, Dorothea, and Kate. Growing up, Frederick was the second of the five children. He grew up and graduated from Greenfield High school in 1888 and attended college at Ohio State University. Although he did not graduate college, he was the first African-American football player on a college campus.  In his last year of school, he left to become a high school history teacher in the state of Kentucky.

Frederick married Betty Estelline Postell and the two had two sons. His second son, Postell Patterson attempted to run the family business after the death of his father, but the doors closed in 1939.  His religion was that of a Methodist. He joined the Freemasons and the Third World Foraker Club.  He also became the second vice president of the National Negro Business League. Politically, his bent was a Republican who was prominent in the election process. He served as a regular caucus member.  His wife, Estelline was a teacher in grade school.

Frederick Patterson was the creator of one of the first automobiles. He joined his father’s business in Greenfield Ohio when his brother Samuel became ill and died. As soon as he joined his father changed the name of the business to C. R. Patterson and Sons. It sold carriages to the public. His father had been doing this business since he ran away from slavery.

His automobiles were in two styles. When he started building the models they were a two-door touring car as well as a four-door roadster. The specifics of the vehicle was that it was a four-cylinder engine that had an electric start as well as other things.  The cost for the vehicle at the time was approximately $850.00.  However, he didn’t make many of the vehicles-only 150. They also competed with Henry Ford’s Model T.

Since he couldn’t compete and survive in the business of making automobiles he changed his business to making buses and trucks, as well as other utility vehicles. He built the chassis on which the vehicle sat.  He also changed the name of the company to the Greenfield Bus Body Company and then to the Greenfield Bus Company.

He weathered the change in materials to make his vehicle but was unable to compete financially with the other companies. Then the stock market crashed in 1929 and it was a hard blow to the company. He died in 1932. The company was struggling to stay afloat then. This was during the Great Depression. Although he struggled to keep the doors of the company open, his son, Postell, was unable to do so and the doors closed in 1939.

Although his family started and participated in other businesses none of them were ones that they owned outright.

Upon his death in 1932, Frederick Patterson and his father had already been responsible for some major patents.  All within the automobile industry.  Some of the patents are still around today. Frederick Patterson was the first black football player at Ohio State University. He broke the color barrier at an all-white school. It might have helped that he could have passed for white but I don’t think he even attempted to do that.

He was the creator of the automobile in some people’s eyes as they feel that Henry Ford now stole the idea to make it from him. But, they were in competition with each other. He also was responsible for his families drive and desire to succeed just as much as his father was who ran away from slavery.

He believe in hard work and sweat. He believed in innovation and thinking outside the box. Frederick Patterson taught history so was able to give to his students a clearer understanding of what life could be like for them if they learned and worked.  His sons continued this legacy. Today C R. Patterson and Sons, as well as Frederick Patterson, are innovators in black history.