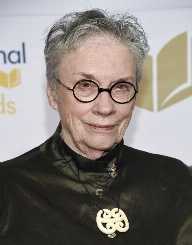 Edna Ann Proulx was born on August 22, 1935, in Norwich, Connecticut, United States. She is an American short story writer and novelist who won the Pulitzer Prize and the National Book Award for her novel ‘The Shipping News.’ She also became the first woman ever to receive the PEN/Faulkner Award for Fiction after her first work ‘Postcards’ (1992). Other notable works include ‘Accordion Crimes’ (1996) and ‘Brokeback Mountain’ (1998) with the later adapted into a film in 2005.

Edna Ann Proulx was born to George Napoleon Proulx and Lois Nellie on August 22, 1935. She was born in Norwich, Connecticut, United States. She went to Deering High School in Portland, Maine from where she graduated. She proceeded to Colby College where she studied for a short period and later joined the University of Vermont in 1966.

She graduated in 1969 with a Bachelor of Arts degree in History. In 1973, she received her Master’s degree from Sir George Williams University in Montreal, Quebec. She pursued her Ph.D. from the same institution but never completed her studies. She later received her honorary doctorate from Concordia.

E. Annie Proulx began her career as a writer first focusing on non-fiction including ‘Sweet and Hard Cider’ which she wrote in 1980. In 1982 while still living in Vermont she wrote ‘The Complete Dairy Foods Cookbook’ and also founded a local newspaper known as ‘The Vershire Behind the Times.’ In 1988 she wrote ‘Heart Songs and Other Stories’ which marked the beginning of her rise to literary acclaim.

In 1992, she published her novel titled ‘Postcards’ which gained much acclaim and widespread praise. In the novel, she narrates the story of a man who is on the run after committing murder in his family’s farm and the desolate condition of the people he left behind. It was also known as ‘Postcards’ since she began each chapter in the book with a postcard which was intended at enabling her readers to connect and fill in the blanks in the story. In 1993, she received the PEN/Faulkner Award for Fiction for ‘Postcard’ making her the first woman ever to win the award.

In 1993, E. Annie Proulx went on to publish another novel titled ‘The Shipping News’ which also brought her much fame. She also received National Book Award the same year and Pulitzer Prize for fiction the following year in 1994. She continued exhibiting her literary prowess in later works such as ‘Accordion Crimes’ which was published in 1996. She moved to Wyoming to console with her family after the demise of her mother.

While at Wyoming she published another book entitled ‘Close Range: Wyoming Stories’ and later followed by a collection of stories known as ‘Brokeback Mountain.’ In the later book, she expressly depicts the life of two young cowboys and the relationship that binds them. In 1998, this piece of work earned her the O. Henry Prize and was adapted into a film in 2005 with starring Jake Gyllenhaal and Heath Ledger. In 2001, ‘The Shipping News’ was also adapted in a film that became a significant work hitting the theatres featuring Kevin Spacey as starring.

E. Annie Proulx's other works included ‘That Old Ace in the Hole’ published in 2003 while still enjoying the serene environment of the Westside.  It was followed by two other collections of stories namely ‘Bad Dirt’ and ‘Fine Just The Way It Is’ in 2004 and 2008 respectively. She embarked on what she was good at seeing her publish a nonfiction work known as ‘Bird Cloud’ in 2011 and 2016 did a fiction work titled ‘Barkskins.’

E. Annie Proulx has spent over thirty years in Vermont where she has been married and divorced three times. She has a total of four children namely Jonathan Gillis, Sylvia, and Morgan. Currently, she resides near Seattle in Washington and is eighty three years old.