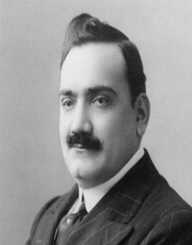 Enrico Caruso was born on February 25th, in 1873. He was a well-known operatic tenor. His singing career earned him profound fame mostly in the Americas and Europe. Throughout his singing career, Caruso managed to record about 260 songs between 1902 and 1920.

Enrico Caruso was born on February 25th, in 1873. His place of birth was in Naples, Italy. He was the third born son to his parents who had seven children. However, he was the only child that managed to survive infancy. His father worked as a mechanic. Later, when he was aged 11, he worked with his father at one of the factories in Naples. Growing up, his mother also insisted that he should attend school. Therefore, he went to school for some time when he was still young.

Enrico Caruso made his first entry on stage when he was only 22 years old. His exceptional performance opened doors for a number of opera performances. At the time, he was under the tutelage of Vincenzo Lombardi. Lombardi helped Caruso to polish his voice.

Early in his career, Caruso struggled with his finances. In one of his early performances, he was booed by a group of people since he did not pay them to cheer him.

With time, Caruso improved and in the early 19th century, he began landing a string of performances which made him earn recognition. His first American record was done on February 1st, 1904. Financially, he was not struggling anymore as he entered into a contract with Victor Talking Machine Company.

Enrico Caruso continued to perform songs both in America and in Europe. Generally, he enjoyed immense success during the Metropolitan Era. His profound fame caught the interest of the Black Hand extortionists. The crooks threatened to harm him if at all he did not pay them. As a result, Caruso paid them an initial amount of $2000. The extortionists did not stop there as they later requested for $15000. Fortunately, the extortionists were captured by Joseph Petrosino, a police detective.

Enrico Caruso tied the knot with Dorothy Caruso in 1918. The couple had two kids together.

Enrico Caruso passed away on August 2nd, in 1921. He was only 48 years old at the time of his demise. He had been suffering from serious health issues after he had completed his North American tour.