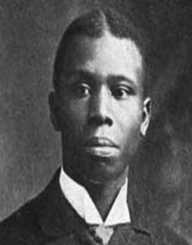 African American poet Paul Laurence Dunbar was born on the 27 June 1872 to Joseph and Matilda Murphy Dunbar. His parents were both freed slaves who separated not long after their son was born.

A bright student, Paul Laurence Dunbar was unable to go to college because of a lack of funds for further education. During his high school years he edited the Dayton Tattler, a newspaper which was published by fellow student Orville Wright.

By the time he was 14 years old, Paul Laurence Dunbar already had become a published poet when the Dayton Herald had published some of his work. After leaving high school, he found work as an elevator operator while at the same time, continuing to work on his poetry. After being invited to read his poems at a Western Association of Writers meeting, he was contacted by poet James Whitcomb Riley who admired his poems and offered him words of encouragement.

Paul Laurence Dunbar's first collection of poems was published in 1893. This self-published collection was entitled Oak & Ivy. In late 1893 he relocated to Chicago and built up literary contacts, and by 1895 his poems were starting to be published nationally as various magazines and newspapers accepted his work for publication.

Paul Laurence Dunbar's second poetry collection, Majors and Minors was published by Hadley & Hadley in 1895. This second collection won a good review from the critic William Dean Howells which increased Dunbar's reputation as a poet on a national as well as an international level. This exposure led to a tour of England, and upon his return from Europe, he was offered a clerkship at the Library of Congress in Washington, D.C.

Paul Laurence Dunbar married Alice Ruth Moore, but the couple separated in 1902 and, later as his health failed, he lived with his mother in Dayton, Ohio. He died on the 9 February 1906.

During the late 1890s, Paul Laurence Dunbar was diagnosed with tuberculosis. He suffered a nervous breakdown in the early 1900s.

Paul Laurence Dunbar was one of the first African American poets to gain recognition.