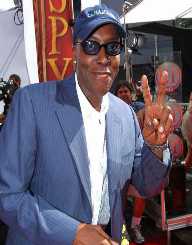 Born on February 12th, 1956, Arsenio Hall rose to become one of the most admired talk show hosts in America. He is also hailed for his acting and comedic skills. While he was in Chicago, he initially tried stand-up comedy which paved his way for a successful career. He began doing openings for celebrities such as Aretha Franklin. During the 1980s, he featured in famous films such as Harlem Nights and Coming to America. Hall also earned recognition for being the first talk show host from the black race. The Arsenio Hall Show became the unprecedented show that earned him nationwide popularity. This show was aired since 1989 and came to an end in 1994. Apart from being a host in this TV show, Hall also featured in other TV shows during his blissful career.

Arsenio Hall was born on February 12th, 1956. His place of birth was in Cleveland, Ohio. He is the son of Anne and Fred Hall. His father was a spiritual individual, and he served as a Baptist minister. Hall began performing on stage while he was still young. During this time, he entertained people by being a magician. For his early education, Hall attended Warrensville Heights High School located in Warrensville Heights in Ohio. He graduated from high school in 1973. He later went to Ohio University. Hall was a member of the speech team while he was studying in the university. He then switched and joined Kent State University where he graduated in 1977.

Arsenio Hall moved from place to place in search of a location where he could successfully pursue his career. First, he migrated to Chicago and later to Los Angeles. He made his first appearances on Soul Train. In the early 1980s, he worked with Alan Thicke as an announcer in the show Thicke of the Night. There are also other comedies and musical shows that he managed to feature in during the 80s. Some of them include Solid Gold, the New Love American Style, and Motown Revue. He also landed himself as a host for The 1/2 Hour Comedy Hour in 1983. This show was however short-lived. In the movie industry, Hall made his first appearance in 1987 by playing in the movie Amazon Women on the Moon. The following year, he starred alongside his longtime friend Eddie Murphy in Coming to America. Harlem Nights followed this in 1989.

Before working on The Arsenio Hall Show, Hall had initially hosted The Late Show for a year from 1987 to 1988. His remarkable role and unique hosting style brought a large audience to his side. It is through this success that Hall was approached whether he could take up the role of hosting his show. Two years down the line, in 1989, The Arsenio Hall Show began airing. This marked Hall’s career turning point as he became nationwide popularity. His famous show was associated with high-end celebrities in the society including Bill Clinton, Paula Abdul, Diana Ross, En Vogue and many more. Following a successful career, Hall concluded his show on May 27th, 1994.

Apart from spending most of his time honing his hosting skills, Hall featured in different fields including the film industry. In 1991, Hall was bestowed with two NAACP Image awards including one for Key of Life Award and the other which was for his notable show. In 1993, he also tried out being an executive producer in the movie Bopha! He spent three years living his private life before later appearing in 1997 in Arsenio show. His co-starring was Vivica A. Fox.