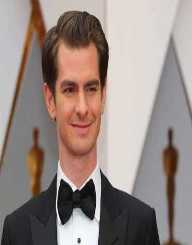 Andrew Garfield is a British American actor. He began his career in the UK stage and television productions. His debut in feature films was in Lions for lambs in 2007. He got international attention in 2010 for his supporting role in The Social Network as Eduardo Saverin.  He received BAFTA and Golden Globe nominations for this role. He got a Saturn Award and another BAFTA nomination for his role in Never Let Me Go.

Garfield received a lot of praise and recognition for the title role as a superhero in the film The Amazing Spider-Man in 2012.

Andrew Russell Garfield was born on August 20 in 1983 in Los Angeles, California. His star sign is Leo. His mother Lynn was British born while his father Richard Garfield was American born. The family moved to Great Britain when he was three years old. The family surname was original ‘Garfinkel’ which was changed to Garfield when his paternal grandparents (who were Jewish immigrants) had moved to London from Central Europe.

Andrew’s father is a swimming coach at the Guildford swimming club and his mother a teaching assistant at a nursery school. His older brother is a doctor. Andrew wanted to study business and was interested in philately. Garfield was a gymnast and a swimmer. His entry into the field of acting began when his friend wanted him to take theatre studies at A level because the class was a pupil short.

Garfield attended the Priority Preparatory School in Banstead. He later attended City of London Freshmen’s School in Ashtead. Garfield trained and graduated from the Central School of Speech & Drama, the University of London in 2004. He began acting in youth theatre productions while still at school.

After graduation, Garfield began working primarily on stage. He won the Best Newcomer Award for his performance in ‘Kes’ in 2004 and won the Outstanding New Comer Award in 2006. Garfield made his television debut in the Channel 4 team series Sugar Rush (2005) in the UK. He acted in many television roles including a 2 part story of the 3rd season of Dr. Who (2005).

Garfield made his American film debut in Nov 2007 in the ensemble drama Lions for Lambs with Tom Cruise, Meryl Streep, and Robert Redford. He also had minor roles in other films like ‘The Other Boleyn Girl,’ ‘The Imaginarium of Doctor Parnassus and the Red Riding’ television trilogy.

Garfield came into international prominence with his role in Never Let Me Go (2010) with Carey Mulligan and Keira Knightley. The same year he starred opposite Jesse Eisenberg in The Social Network based on the foundation of Facebook.

Garfield played the role of Eduardo Saverin. This role earned him wide recognition, and he received several BAFTA and Golden Globe nominations. In 2010 he was cast in the main role in Marc Webb’s The Amazing Spider-Man opposite Emma Stone.

The film which released in 2012 and earned a worldwide total of $ 752,216,557 and his performance was very well received all over the world. Arachnologists Yuri M Marusik and Alireza Zamani have honored his portrayal and named a new species of spider Pitha Garfield after him.

Garfield gave his Broadway debut as Biff Loman in Arthur Miller’s Death of a Salesman. He was nominated for a Tony Award for this role. He co-produced and starred in ‘99 homes’ in 2014. In 2016 he starred in Martin Scorsese’s film Silence and Mel Gibson’s ‘Hacksaw Ridge.’

His upcoming films include Breathe (2017) directed by Andy Serkis where he plays an adventurous man paralyzed by polio and David Robert Mitchell’s noir thriller Under ‘The Silver Lake’ in 2018.

Garfield won the Milton Shulman Award for Outstanding Newcomer at 2006 The Evening Standard Theatre Awards. He shared the London Theatre’s Critics Circle Most Promising Newcomer Award with Connie Fisher in 2007.

Garfield has dual citizenship in The United States and The United Kingdom. He is reported to feel equally at home in both places.