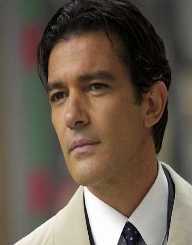 Antonio Banderas, a Spanish actor, is a man that is best known for his roles in Desperado and The Mask of Zorro. He also voiced the character “Puss in Boot” in the Shrek Sequels and the 2011 film “Puss in Boots.” He also has won a host of awards during his career.

Antonio Banderas was born on the 10th day of August 1960, in the city of Andalusian in Malaga. He was born into the family of Jose Dominguez, a police officer in the Civil Guard. His mother is a school teacher and goes by the name Ana Banderas Gallego. He took his mother’s last name as his stage name instead of his father’s family name. His father trained him and his brother in the Roman Catholic way. Antonio has long renounced his faith in Roman Catholic but he does occasionally pray to the Virgin of Guadalupe.

As a child, Antonio always wanted to be a professional footballer with a strong love for footballing. On a particular day, he broke his foot while playing ball at the age of 14. Unfortunately, his passion for footballing ended with the broken foot. He later pursued his keen interest in performing Art.

Antonio Banderas became a part of the ARA theater School which was run by the wife of Edgar Neville, Angeles Rubio-Arguelles and the college of Dramatic Art, both in Malaga. He traveled to Madrid to join a theater troupe that toured Spain. He, however, got himself a spot with the Spanish National Theatre due to his theater and street performances.

Antonio Banderas’ acting career started when he was 19 years old. He began acting in small theatres before he got an opportunity with Pedro Almodovar. However, in 1982, he debuted in Spanish director Pedro Almodovar’s movie, “Labyrinth of Passion”. After this, he was cast in a number of movies. He was also cast in the internationally acclaimed “Women on the Verge of a Nervous Breakdown”. He performed a lot of essential roles excellently in the films.

In 1989, Antonio performed his breakthrough role “Atame,” an Almodovar’s film. This film was known as “Tie Me Up! Tie Me Down!” in English. However, the film achieved moderate success in the United States and the United Kingdom. After the release of “Atame,” he traveled to the United States where he was introduced to Hollywood. Almodovar is always credited for launching Banderas into an international world due to his belief in him by giving him roles to play in his movies.

Antonio Banderas starred as a struggling musician in an American Drama film, “The Mambo Kings” which happens to be his first American drama in 1922. However, he did not let the minimal English he spoke affect him. Antonio learned his lines phonetically and gave an excellent performance as a struggling Musician.

He made his mark with Mainstream Americans when he acted in the Oscar-winning film, “Philadelphia” in 1993. He played the role of a gay lover of an AIDS-afflicted lawyer. He, then further got a job to play as a folk singer seeking revenge on the drug lord who killed his lover in 1995, Desperado.

After these films, Antonio Banderas started getting global recognition and starred in a host of films all over the world. He made his directorial debut in a comedy-drama film in “Crazy in Alabama.” He also collaborated with Robert Rodriguez who cast him in the Spy Kids film in 2001. He had a supporting role but received a lot of accolades.

Antonio Banderas is also a businessman and has a 50% stake in a winery in Villalba de Duero. He has also successfully promoted some fragrances for people working with the Multinational Company Puig.

The major works of Antonio Banderas include “The Mask of Zorro” where he starred with Anthony Hopkins. In this movie, the two of them received both financial and critical success. This work is one of his most successful movies. His second performance with El Mariachi was “Once Upon a Time in Mexico”. This film received an award for being the most improved second sequel of all time.

Antonio Banderas was first married to Ana Leza on the 27th July 1987 and got separated in 1995. In May 1996, he married Melanie Griffith, an actress. They had however met a year earlier onset. The couple has a daughter, Stella del Carmen Banderas.