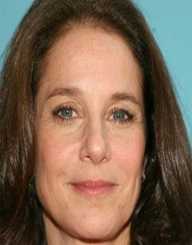 Debra Winger is an American actress. She is best known for her roles in An Officer and a Gentleman and Terms of Endearment.

Debra Winger was born on May 16, 1955, in Cleveland Heights, Ohio. Her father was a meat packer, and her mother was an office manager. The family moved to California when she was six years old.

Winger graduated from James Monroe High School in Sepulveda, California when she was 15. She enjoyed acting during her time there.

Debra Winger was injured while working at a local amusement park. While she was recovering, she vowed to become an actress. She found small roles, including the role of Wonder Girl on the TV series Wonder Woman. While she took roles in films, her breakout role was of Sissy in Urban Cowboy alongside John Travolta.

Her next two films gave her critical acclaim. She starred in An Officer and a Gentleman with Richard Gere in 1982 and earned her first Oscar nomination. Her next movie, Terms of Endearment with Shirley MacLaine gave her another Oscar nomination only to lose to her co-star.

Winger's acting career bounced around during the rest of the 1980s with poor reviews in movie flops such as Mike's Murder, Black Widow, and Made in Heaven. Her comeback moment came in 1993 in the film Shadowlands with Anthony Hopkins. Unfortunately, she could not get better opportunities. During the last half of the 1990s, she focused on raising her family, particularly her new son.

When Debra Winger returned to acting, she returned with more concentration on television. She made a guest appearance in Law and Order but also took on roles in TV movies such as Dawn Anna and mini-series such as The Red Tent. In 2008 she received praise for her role as the mother to Anne Hathaway in Rachel Getting Married.

Winger continues to act. Most recently she played Maggie Bennett in the Netflix series The Ranch.

Winger has been nominated three times for an Oscar award for Best Actress in a Leading Role. Her most recent Oscar nomination was for the film Shadowlands in 1993. She has also been nominated for four Golden Globe awards

Debra Winger has been known to be difficult behind the scenes with her co-stars and directors. This reputation may have been why she turned down offers after her back to back film success in the early 1980s,