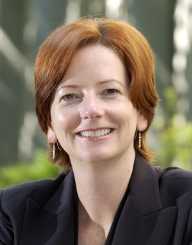 Born on September 29, 1961, Julia Eileen Gillard is a former Australian politician who became the first woman to hold topmost positions in that country. She was a 13th Deputy Prime Minister rose to become the 27th Prime Minister of Australia from 2010 to 2013. Prior to her being the Prime Minister, she held ministerial cabinet positions from 2007 to 2010 including Minister for Education, Minister for Social Inclusion, Minister for Employment and Workplace Relations and Minister for Inclusion. Julia Gillard political career started in 1998 when she was elected to the Australian House of Representative for Lalor. She later became in charge of Population and Immigration after being elected as Shadow Cabinet during the 2001 federal elections and became the Deputy Labor Leader in 2006.

After resigning from politics, Gillard became a visiting professor at the University of Adelaide and a nonresident senior fellow at the Center for Universal Education at Brookings. She has also served on positions like the chairperson of the Global Partnership for Education and the board of mental healthorganisationbeyondblue.

Julain Eileen Gillard was born on September 29, 1961, in Barry, Wales, the United Kingdom to John Oliver Gillard and Moira. His father was a psychiatric nurse, and her mother worked at a local Salvation Army nursing home. The family had to leave the country when Julia Gillard suffered bronchopneumonia at age five upon doctor’s advice. They were to send her to a warmer country to speed up her recovery, which resulted in their departure to Adelaide, South Australia. She started her education at the Mitcham Demonstration School and then to the Unley High School. After graduating, she enrolled at the University of Adelaide. From 1981 to 1982, she became the president of the Adelaide University Union.

Julia Gillard became politically active during this time when the daughter of a State Labor Minister was able to convince her. She subsequently joined the Labor Club and got involved in their activities including the fight to cut the federal education budget. She dropped out from school in 1982 and left for Melbourne where she worked with the Australian Union of Students. Her involvement in politics increased in Melbourne as she became the leader of the Australian Union of Student from 1983 to 1984. She held other positions including the secretary of the left-wing organisationSocialist Forum and the President of the Carlton branch of the Labour Party from 1985 to 1989. While there, she enrolled at the University of Melbourne where she graduated with a Bachelor of Law degree in 1986 and 1989, had a Bachelor of Arts degree.

After graduating from the law school, she practiced industrial law with the law firm Slater & Gordon in Werribee, Victoria in 1987. She was later in 1990 admitted as a partner making her the youngest to assume such position in the firm.

During the 1990s, Julia Gillard contested for the Labour Party’s slot for a House of Representatives at but failed on two occasions. Gillard never backed out of her under seek a political career and attempted again in the 1996 federal election. Prior to this, he took a leave of absence from Gordon & Slater. She contested on the ticket of Labour for the Senate after been preselected for the third position but lost. She later resigned from the law firm to become the Chief of Staff to John Brumby who was at the time the Leader of the Opposition in Victoria. She was involved in drafting the affirmative active, to ensure preselecting women for 35 percent of winnable seats within the Labour Party in Victoria.

Julia Gillard contested and won the House of Representative seat of Lalor during the 1998 federal election. The seat was one of the Labour Party’s safest seats at the time. Julia Gillard served on various committees while in parliament including Employment, Education and Workplace Relations committees from 1998 to 2001.

Julia Gillard also served on the joint committees of the Public Account and Audit and the Native Title and the Aboriginal and Torres Strait Islander Land Fund. Gillard was in 2001 selected to the Shadow Cabinet under the Labour Leader Simon Crean after Labour lost the 2001 federal election.

She was in charge of Population and Immigration and was added the Reconciliation and Indigenous Affairs later in 2003. She also became the Shadow Minister for Health and Deputy Manager of Opposition Business in the House. Julia Gillard political influence continued to grow and became very powerful in the Labour Party. She then sought for the deputy leadership in a fierce contest with Jenny Macklin on December 1, 2006. Macklin however resigned , nd Gillard went unopposed becoming the Deputy Labour Leader to Kevin Rudd.

Being in opposition since 2001, the Labour Party finally won power in 2007 after the federal election. Due to her position as the deputy labour leader, she automatically became the Deputy Prime Minister and was sworn in on December 3, 2007, becoming the first female to assume that office. Aside from that position, she became the minister of Education, Employment and Workforce Relations and held several other positions.

The Prime Minister, popularity began to decline with the introduction of some unpopular policies. This put Gillard in a very good position to rise to the occasion when things finally fell apart. He also lost the support within the Labour Party forcing him to resign his post onJune 24, 2010. Julia Gillard then ascended to the position unopposed and was sworn in as the 27th Prime Minister of Australia. The then Treasurer Wayne Swan was also sworn in as her deputy. She became the first female Prime Minister of Australia.

Julia Gillard contested for the position on her own right during the 2010 federal election. She won the elections but the labour won only 72 seats out of the 150 House of Representatives seats. This made them fall short of the required number to have a majority government. However, they gain support from some independent members and other crossbench MPs to allow Julia Gillard  and the labour rule with aminority government. During her term of office, she improved the economy, heath and education.

Julia Gillard has been in a relationship with Tim Mathieson since 2006 after they met in 2004. She also had previously had an affair with an official of the Australian Worker’s Union, Bruce Wilson in the 1990s. She has no children and once stated she does not want to have children.  She loves sports and is an ardent supporter of the Australian rule football team Western Bulldogs. She also supports the Melbourne Storm rugby league team. According to Gillard, even though she respects religion ,she is non-religious and does not believe in God. She released an autobiography, My Story in 2014.

The VrijeUniversiteitBrusselhonoured Julia Gillard with a doctorate “for her achievements as a woman committed to education and to social inclusion, and for the impact of her commitment on the situation of children, youngsters and women worldwide” on February 11, 2015. She was conferred a Doctor of Victoria University, honoris causa in April 2014 and several others doctorates from the University of Canberra and Deakin University.