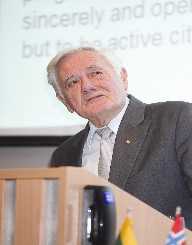 Valdas Adamkus was born on November 3, 1926, in Kaunas, Lithuania. He came from a Roman Catholic family. His father was the head of the Lithuanian Air Force School. In his youth, Adamkus was a member of an underground group against the Soviet occupation in 1940. During the Nazi occupation of Lithuania, Adamkus published an underground newspaper to spread his message. His family fled the country during World War II to avoid the second Soviet occupation in 1944.

Adamkus and his family went to Germany, where he attended the University of Munich. In 1949, he immigrated to the United States and settled in Chicago with the Lithuanian community. He began working in an automobile factory and later became a draftsman. He went to study at the Illinois Institute of Technology and graduated as a civil engineer in 1960. Adamkus was at the time fluent in five languages- Lithuanian, Polish, English, Russian and German.

In 1961, Adamkus along with other Lithuanian Americans began activism against the Soviet regime. The group collected around 40,000 signatures and petitioned the United States government to intervene with the deportations of Lithuanians to Siberia. The petition was presented to then vice president Richard Nixon. Adamkus also petitioned to the United Nations Secretary-General and president John F. Kennedy about the Soviet activities in occupied Lithuania.

In 1970, Adamkus joined the United States Environmental Protection Agency and worked in Cincinnati. He continued his career in the position until 1981, when President Ronald Reagan appointed him the regional administrator of the Agency. In 1985, he was awarded the Distinguished Executive Presidential Rank Award for his service.

Valdas Adamkus first visited Lithuania in 1972 as a member of the official United States delegation in an environmental conference in Moscow. After the beginning of perestroika- the political changes in the Communist party in the Soviet Union, Adamkus began to visit his homeland more frequently. In 1997, after serving twenty-nine years for the United States government, Adamkus retired. Shortly after, Adamkus moved back to Lithuania.

During his presidency, Adamkus actively promoted democracy in the former Soviet Eastern European nations. He also served as the mediator during Ukraine’s political crisis in 2004 presidential election, where both candidates claimed victory. In 2005, he rejected an invitation to celebrate the end of World War II in Europe, since it marked the beginning of 50-year-long Soviet repression in Lithuania. In response, United States Congress passed a resolution that Russia should issue a clear statement and admit the illegal occupation and annexation by the Soviet Union from 1940 to 1991 of all three Baltic countries. Russia refused to do so. Adamkus also actively supported the dialogue between European Union member states and the former Soviet republics seeking membership of EU.

Valdas Adamkus is the honorary member of the International Raoul Wallenberg Foundation. In 2003 he was named the UNESCO Goodwill Ambassador for the Construction of Knowledge Societies. He was named in recognition of his dedication to the Organizations aims and ideas and for his extensive experience in many UNESCO’s areas of concern.

As the president, Adamkus had a very high approval rating. He placed his interest in increasing the public participation in the political world, targeting transparent use of EU funds to build greater well-being for the country and controlling “brain drain” by supporting research and higher education infrastructure.