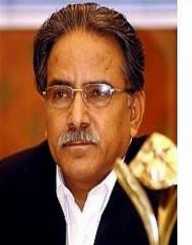 Pushpa Kamal Dahal popularly known as Prachanda is a Nepalese politician and former Prime Minister of the country. Born on December 11, 1954, Prachanda has served in that capacity twice, first from 2008 to 2009 and again from 2016 to 2017. Prachanda is the leader of the Communist Party of Nepal (Maoist-Centre). Prachanda was the leader of the party during the communist insurgency and the subsequent civil war, which saw more than 17,000 Nepalese dead.

After several talks of ceasefire and the war came to an end in 2008 and was followed by an election of which the Communist Party Nepal (Maoist)(CPN) (M), became victorious. The Constituent Assembly of Nepal, therefore elected Prachanda as Prime Minister that same year. However, Prachanda resigned on May 4, 2009, after the president Ram Baran Yadav thwarted his effort to remove the Army Chief General, RookmangudKatawal.

Prachanda was born on December 11, 1954, in Dhikur Pokhari in the Kaski District. He spent most of his early life in the Chitwan District where he received his education. He enrolled at the Institute of Agricultural and Animal Science in Rampur, Chitwan where he received his diploma of science in agriculture. After his education, he was employed by USAID sponsored rural development project in Jajarkot.

Since the party was a secret one, Prachanda remained in hiding even after the popular democratic movement known as Jana-Andolan that ousted the monarchical rule in 1990. He steered the affairs of the party in secrecy until he became known internationally during the communist insurgency and the following civil war in 1996.

On February 4, 1996, the leader of the United Front Party Baburam Bhattarai had presented 40lists demands to the ruling Nepalese Congress government led by Prime Minister BahadurDueba to meet of prepare for a civil war. The demands included "nationalism, democracy, and livelihood," "domination of foreign capital in Nepali industries, business and finance should be stopped," and "discriminatory treaties, including the 1950 Nepal-India Treaty, should be abrogated". The other was and "land under the control of the feudal system should be confiscated and distributed to the landless and the homeless." These demands were however not met, and that led to the Nepalese civil war fought from 1996 to 2006. During the time

Prachanda led the Communist Party of Nepal (Maoist) (CPN) (M), military efforts which took control of the mountainous regions and some parts of western Nepal. The relationship between the two warmongers, Prachanda and Baburam Bhattarai went bad, and at a point, Bhattarai was removed from the party due to internal party power struggles between him and Prachanda. Prachanda was however reinstated later. King Gyanendra took advantage of the war to reinstall the monarchical rule and dissolved the democratic elected parliament in 2002. On April 26, 2006, Prachanda after serials of talks with the ruling government, the Seven Party Alliance reached a deal and he, therefore, announced a 90-day ceasefire. The announcement was followed with the April 2006 Nepalese general strike in Kathmandu, and other places restored the parliament and forced King Gyanendra out of power.

An interim government made of the Seven Party Alliance came to power and started negotiation with the CPN (M), with both parties agreeing to a new constitution, a new constituent assembly and Nepal becoming a republic. On June 16, 2006, Prachanda met with then Prime Minister, Girija Prasad Koirala resulting in the Comprehensive Peace Accord and the Maoist at the end was accepted into Nepal’s political system. During2008, Constitutional Assembly Election, the CPN (M), had a majority in parliament.

Prachanda was elected the Prime Minister by the Constituent Assembly on August 15, 2008. After his election, he pledged to work with other political parties and craft a new constitution for the country. He resigned from office on May 4, 2009, after his decision to sack the Army Chief RookmangudKatawal was met with opposition from the President Ram Baran Yadav. Prachanda, however, remained in office until his successor was elected on May 23, 2009.

After his resignation, his popularity relatively dropped and unsuccessfully contested as a candidate for Kathmandu constituency No.10 during the November 2013 Constituent Assembly election but won a seat in a different constituency. Prachanda was once again elected as the Prime Minister of Nepal in August 2016. On May 24, 2017, he resigned from his post and was succeeded by Sher BahadurDeuba.