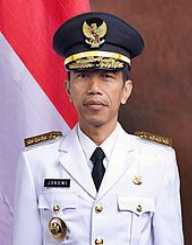 Joko Widodo, the famous administrator and politician was elected as the 7th President of Indonesia in October 2014. Before he became President, he was the Governor of Jakarta and the Mayor of Surakarta. He has come up from a humble background and is respected for his honest and ethical image. Jokowi is appreciated for his land reforms and healthcare programmes.

Joko Widodo was born on 21 June in Surakarta, Indonesia. The family consisted of his parents, Noto Mihardjo and Sudijatmi Notomihardjo and three sisters. The family had to face the wrath of the authorities frequently as they lived in illegal huts. He worked in his father’s furniture shop in order to make money for buying his books.

Jokowi was a good student and had his primary education from State Primary School, Tirtoyoso. He joined Gadjah Mada University after his high school education. He studied Forestry and graduated in 1985.

After his graduation, Joko Widodo joined BUMN PT Kertas Kraft Aceh. He was posted in Pinus merkusii plantation situated in Gayo highlands. His primary interest was business, and he started his own business, CV Rakabu in the year 1988. The business folded up due to a scam. He did not give up his business ambitions and revived the business again. By 2002, he had a flourishing business of furniture export. He was elected the chairman of the local branch of the association of furniture manufacturers.

In addition to his business interests, Joko Widodo wanted to serve people by joining politics. He contested for the post of mayor of Surakarta as a candidate of the Indonesian Democratic Party of Struggle. Though he was a novice in politics, he was able to win the election. As Mayor, he started many reforms for the betterment of the society. His integrity and modest background caught the attention of the people, and he had no problem in getting the support of the general public.

Joko Widodo frequently interacted with the people and did not draw any salary as mayor. When he stood for another term as mayor in 2010, he had no problem in getting re-elected. He got more than 90 percent of the votes polled. In 2012, Joko Widodo contested for the position of the governor of Jakarta. He had little difficulty in dethroning the serving governor, Fauzi Bowo. As governor, he focussed on promoting small industries and concentrated on education and public health care.

Widodo introduced Healthy Jakarta card or Kartu Jakarta Sehat for the health care of the common man. To help students to purchase their requirements for educational purposes, he introduced Smart Jakarta Card. This enabled the poor students to draw money from ATMs. Born and brought up in poverty, he had sympathy for the underprivileged. As mayor and governor, he interacted with the poor frequently and did his bit to alleviate their sufferings. His honesty and simplicity attracted the poor and ordinary people.

As a commoner president, his priorities are clear. Joko Widodo is concentrating on improving public health care and reducing corruption in the government organisation. He is trying to get foreign investment to promote the industry and also has initiated land reforms.

Highlights of his career

The International City Mayors Foundation ranked Joko Widodo as the third best mayor in the world. In 2011, the Government of Indonesia recognised his services by awarding him with the Bintang Jalasena Utama, 1st Class or ‘Navy Meritorious Service Star’ In 2014, he got the award of Bintang Republik Indonesia Adipurna or 1st Class ‘Star of the Republic of Indonesia’.

Joko Widodo is married to Iriana, and the couple has two sons and a daughter. The two sons are Gibran Rakabuming Raka and Kesang Pangarep and the daughter is named Kahiyang Ayu. The family practises Islam.