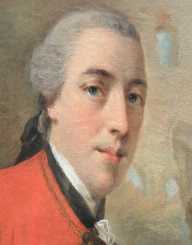 John Andre was a Revolutionary War hero.  However, John Andre was the one to negotiate the control of a fort with American traitor Benedict Arnold.

John Andre was born on May 2, 1750, in London, England. His father Antoine was a merchant of Swiss descent while his mother Marie Louise was French.

John Andre was fluent in English as well as French, German, and Italian. John Andre was also talented in many other areas including the arts and music.

After graduation, Andre enlisted in the British Army when he was twenty years old.  John Andre had been promoted to the rank of lieutenant when John Andre was serving in Canada in the Royal English Fusileers.

Upon his return to the British Army, John Andre was promoted to captain, then major.  Not only was he in battles serving under Major-General Charles Grey, but John Andre was entertaining Loyalists living in New England.  John Andre did live in Benjamin Franklin's house during his nine-month stay in Pennsylvania.

As the British were evacuating, John Andre was found to be stealing from Franklin's home. Some of the items were later returned.  It is believed that he was ordered to cause the inconvenience. It was John Andre that negotiated the control of West Point fort with its commander, General Benedict Arnold.  Andre paid Arnold 20,000 pounds for the successful exchange of the fort to British control. However, John Andre was caught with documents from Arnold and was arrested.

John Andre was captured by the Continental Army on suspicion of espionage.  John Andre was executed by hanging on October 2, 1780, at the age of 30.

John Andre kept a journal from his experiences in America.  His records on the British perspectives during some of the battles in which he fought has been considered a very reliable resource for historians.