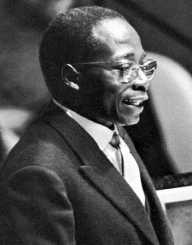 Leopold Sedar Senghor led the Republic of Senegal. He was an intellectual man who was best known for his African poems. Not to mention he significantly contributed to the Negritude movement in the 1930s. His poems and write-ups illuminated his love for his colonized country. After Senegal’s’ independence he ruled the French National Assembly. He was a respected leader who governed his own country with wisdom.

On October 9, 1906, Leopold Sedar Senghor spent his childhood life in Senegal, Jaol-Fadiouth to a businessman, Basile Diogoye, and Gnilane Ndieme. He joined Fathers of the Holy Spirit boarding school in 1913. He also studied French, mathematics, and literature at a local university. He boarded a vessel where he sailed to France in 1928. Afterward, Sedar joined Sorbonne University in Paris. He then dropped out in the middle where he started taking introductory courses for an elite admission without success. Leopold became a happy man in 1932 where he garnered French citizenship.

After his graduation in 1935, Sedar served as a professor for a decade. It was here that he embraced the negritude movement. It was an affirmation that defined the value, identity, and African culture. In 1945 Sedar was appointed as Dean of the Linguistics Department where he worked for fifteen years.

In the mid of 1948, Sedar founded Bloc democratique senegalais party. His movements fathomed with success in elections. For five years, Sedar served as special deputy of the French parliament. He then served as the Thies mayor in 1958.On September 5 in 1960 Sedar was appointed as the first resident of Senegal. He became the first leader who wrote Senegalese national anthem that is still active to date.

Early in 1964, Sedar published his first book titled Liberty. He then announced his resignation in 1980 where it took effect by the end of the year. In 1983 Leopold was selected to chair of French Academy. He took a chance and published the 5th volume of Loberte series that was appreciated by all.

Leopold Sedar married Ginette Eboue in 1946 and 1957 he married his second wife, Colette Hubert. He breathed his last on December 20 in 2001 due to natural causes in France. Sedar was praised for his notable works of literature and poetry.