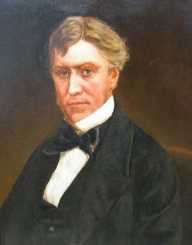 Surveyor, railroad building contractor and manufacturer Thomas Brassey was born in Buerton, Cheshire, England on the 7th November 1805 to Elizabeth Perceval and John Brassey. The family were landowners and ran a prosperous farm.

Thomas Brassey was homeschool until the age of twelve and then became a pupil at The King’s School in Chester. After completing his school, he trained to be a land surveyor, doing an apprenticeship with William Lawton, who as the agent of Francis Richard Price of the Bryn-y-Pys estate.

Upon the completion of his apprenticeship in 1826, Thomas Brassey became a partner in the business with Lawton. He moved to Birkenhead and around that time started working on the London to Holyhead road under Thomas Telford.

Thomas Brassey signed his first railway contract in 1836 when he undertook to build ten miles of the Grand Junction Line between Birmingham and London. He then worked on the Penkridge Viaduct on the same line. This led to work in Europe where he built large sections of the railway in western France as well as the Paris and Rouen Railways. Contracts for work in Belgium, Denmark, Holland, Norway, Spain, Italy, and Austria followed. He was also involved in the construction of the Grand Trunk Railway in Canada and worked in South America, India and Nepal.

During the years 1848-1863 Brassey was involved in building 2,374 miles of railway at a total contract sum of over 27 million English pounds. At the peak of his business operations, he employed over 75,000 people. He built a third of all British railways, three-quarters of France’s railways and many others abroad.

Thomas Brassey was also involved in the building of The Grand Crimean Central Railway during the Crimean War to assist with the war effort and movement of troops and supplies.
(October 1953-March 1856).

Apart from railroads, Thomas Brassey has had business interests in the manufacture of supplies, shipping, dockyards, sewerage works and engineering works.

He helped Brunel finance the building of the famous ship SS Great Eastern, the biggest ship of its time when it launched in 1858. The ship was damaged on her maiden voyage but continued as a passenger liner between North America and the UK, eventually becoming a cable-laying ship transporting the telegraph cable for the building of transatlantic cable in 1866.

A visionary, Thomas Brassey had thought out the possibility of a tunnel under the English Channel as well as a canal over the Isthmus of Darien.

Thomas Brassey married Maria Harrison in 1831 and the couple of four children. One son, Thomas became a governor of the state of Victoria, Australia and was an expert on British naval history. Thomas Brassy Jr. and his wife owned the first private yacht to circumnavigate the globe, the Sunbeam. His wife wrote a book about their voyage: The Voyage of the Sunbeam.

His other two sons both became members of parliament.

Thomas Brassey died on the 8 December 1870 while staying at St Leonards-on-Sea. He had been suffering from cancer.