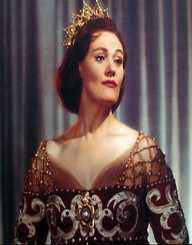 Joan Sutherland spent her life devoted to music. She loved to sing every chance she got. She grew up with music in the home and never looked back. Her mom was an amateur singer and piano player. This was where she got her love of music and singing. But she decided to go further than her mother ever had.

Joan Alston Sutherland was born to a tailor and an amateur singer and piano player on November 7, 1926, in Sydney Australia. She was their only child.

Joan attended school at St. Catherine’s in a suburb of Waverley, New South Wales. She started seriously studying voice with John and Aida Dickens at the age of 18. At the age of 24, in 1950, she went to London’s opera school of the royal college of music with Clive Carey.

In 1947 Joan Sutherland made her concert debut in Sydney as Dido in Purcell’s Dido and Aeneas. She made her stage debut in Eugene Goossen’s “Judith” in 1951 after winning Australia’s most important competition in 1949 named “Sydney Eisteddfod McDonald’s Operatic Aria."

Joan Sutherland worked with conductor Richard Bonynge, and the two fell in love. On October 16, 1952, the two were married. They had a son named Adam in 1956.

She trained to be a Wagnerian dramatic soprano because she was an admirer or Kirsten Flagstad in her early career. Eventually, her husband convinced her that Wagner might not be her specialization. This was because she could produce such high notes and coloratura so efficiently. He said she should explore the Bel Canto repertoire, so she did.

Joan Sutherland spent most of her career singing dramatic coloratura soprano. In 1957 she sang selections from Emilia di Liverpool by Donizetti in a radio broadcast. Joan was asked to sing Lucia di Lammermoor at the royal opera house in 1959. This was a breakthrough for her career making her a star.

Around the 60’s she established a reputation as a diva with an extraordinary voice. Her debut at the metropolitan opera was on November 26, 1961. She sang a total of 223 performances in many different operas. On March 12, 1989, she had her last performance there.

By the 1970s Joan Sutherland's voice lost some clarity and was often criticized by this. Taking the criticism to heart, she improved her diction significantly continuing to thrill the audiences around the world.

Joan Sutherland's last performance was on New Year's Eve in 1990 at the Covent Garden. Making very few public appearances, Joan preferred a quiet life at home. She lived in Les Avant’s Switzerland. She was 64 years old when she retired.

She published her autobiography in 1997 called “A Premia Donna’s Progress.” A complete list of her performances can be found in the book. Her official biography titled “Joan Sutherland: The authorized biography” was published in February 1994. She fell and broke both her legs while gardening at home on July 3, 2008. She recovered completely from her injuries.

Joan Sutherland's family announced her death on October 11, 2010. They say she passed at home in Switzerland the day before of cardiopulmonary failure. She requested a small and private service. The opera Australia arraigned a state memorial service on November 9, 2010.