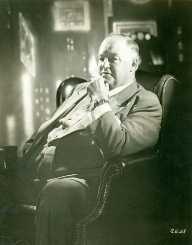 Sydney Greenstreet was born 27th December 1879, to John and Ann Jarvis. He was born in Kent,England, United Kingdom, in a town called Sandwich. He was one of seven children.

At the age of 18, Sydney Greenstreet left home to become a Ceylon tea planter. His business was doing well until drought forced him to close his doors. His next job was as a manager for a brewery, and during this period he also took acting lessons.

In 1902, Sydney Greenstreet made his stage debut in a production of Sherlock Holmes. The production played at the Marina Theatre in Kent. He then joined Ben Greet’s Shakespearean Company, and toured Britain to perform on stage with them.

In 1905, Sydney Greenstreet made his debut in New York City. He continued with his stage work, and in 1916, appeared in a production of As You Like It with Margaret Anglin. Throughout the 1930s he worked with people like Alfred Lunt, and Lynn Fontanne. He worked between Britain and the U.S., appearing in many productions.

Due to his versatility, Sydney Greenstreet was offered many film roles, but for some reason, he refused to do them.

In 1941, at the age of 62, Sydney Greenstreet made his film debut. It was in the movie The Maltese Falcon, alongside Humphrey Bogart. Greenstreet would go on to appear in many movies with Bogart, including Casablanca (1942), and Passage to Marseille (1944).

Sydney Greenstreet's last movie appearance was in Malaya (1949), which he appeared in with Spencer Tracy and James Stewart.

After finishing his acting career, Sydney Greenstreet died within five years, in 1954. He had suffered from both diabetes and a kidney disorder through the years, and it was the illnesses that caused his death.

Sydney Greenstreet married Dorothy Ogden in 1918, and he was still with her at the time of his death in 1954. The couple had a son, John Ogden Greenstreet.