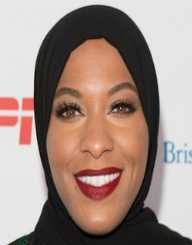 Ibtihaj Muhammad was born on December 4th, in 1985. She is a celebrated American sabre fencer. She earned her fame for being the first ever American athlete to compete while wearing a hijab. During the 2016 Summer Olympics, she emerged victorious after qualifying for her first round. However, she was later defeated by Cecilia Berder in the second round.

Ibtihaj Muhammad was born on December 4th, in 1985. Her place of birth was in Maplewood, New Jersey. Her parents were born and raised in the U.S. where they later converted to Islam. Eugene Muhammad, her father, once served as a police officer. On the other hand, Denise, her mother worked as an elementary school teacher.

Due to traditional beliefs, Ibtihaj’s parents thought that the best sport for her would be one where she covered her entire body. As a result, she resorted to fencing.

Ibtihaj Muhammad went to Columbia High School situated in Maplewood. She graduated from her class in 2003. Later, she went ahead and joined Duke University. Here, she graduated with two bachelor’s degrees. One was for Africa and African-American studies and international relations.

While taking her studies at Columbia High School, Ibtihaj Muhammad showed interest in the fencing sport and as a result, joined the school’s team. She was only 13 years old at the time. After that, she became a member of the Peter Westbrook Foundation in 2002. This is a foundation that helps people to improve their life skills by merely using the fencing sport. The foundation opened doors for her as she got the opportunity of training with elite athletes within the program.

Sooner or later, she obtained a scholarship to study at Duke University. Her success in the fencing sport granted her the opportunity of receiving a scholarship from the university. She was a junior Olympic Champion. In 2010, Ibtihaj joined the U.S. National Fencing Team.

Cécilia Berde defeated Ibtihaj Muhammad during the 2016 Summer Olympics. However, she managed to bag home a bronze medal. Regardless of the loss that she suffered, she attracted attention to her side. Ibtihaj earned immense recognition for being the first woman to participate in Olympics competition while wearing a hijab.

Besides being acting on the court, Ibtihaj Muhammad is also an entrepreneur. Together with her siblings, they established a clothing company called Louella. Similarly, she is a sports ambassador trying her best to motivate women and young girls through sports. Ibtihaj has toured a number of nations empowering them about the benefits of education and sports. She has also penned two books which talk about her life.