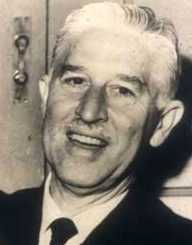 American zoologist was born in Carthage, Missouri on the 28 March 1905 to Judge Joseph Perkins and Mynta Mae Miller. His father was a lawyer and judge in Jasper County. When Marlin Perkins was young, his mother died, and he was brought up by his aunt on her farm. It was during these early years that he developed an interest in animals and spent his time collecting toads, mice, and snakes. He later returned to live with his father in Carthage, Missouri.

After high school, he enrolled at the University of Missouri to study zoology but left without graduating when he was offered a job at the Saint Louis Zoo.

The management at Saint Louis Zoo recognized his skill with snakes, and after a short time with the zoo, Marlin Perkins was given the responsibility of caring for reptiles.

He used this opportunity to develop the collection of reptiles for the zoo and also designed various cages for reptile viewing. Two years after commencing work with the zoo he was officially appointed Curator of Reptiles. During this time, he grew the reptile collection to over 500 specimens.

During this time he started appearing in Mutual of Omaha’s Wild Kingdom which became known as Wild Kingdom. The show was another success as he exposed viewers to animals in their natural habitats around the world. The show was aired worldwide in over 40 countries and contributed to the emergence of public awareness relating to ecology and conservation. Marlin Perkins retired from the Saint Louis Zoo in 1970 but remained a leading light in the conservation and ecology movement.

In 1974 Marlin Perkins was presented with an American Education Award. He also received a number of honorary degrees from various American universities.

The Marlin Perkins Society, which focuses on the conservation of endangered species, was established by the Saint Louis Zoo in 1991.

He was married to Elise Moore from 1933 until 1953. The couple had one child, a daughter Suzanne. In 1960 he married his second wife Carol, and they remained together until he died/