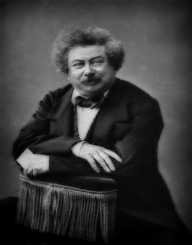 French writer Alexandre Dumas was born on the 24 July 1902 in the region of Soissons, France. His father was a Creole having descended from French nobility and Dominican slaves. After the death of his father in 1806, Dumas lived in Paris, France.

Alexandre Dumas’s father left his family with few financial resources, and Dumas was largely an autodidact. At one time he did study to become a notary. During his time as a student, he began writing plays.

His first job was with the Duke of Orleans, which he obtained through his father’s connections. Alexandre Dumas worked as a secretary and continued writing plays. Some of these political writings resulted in him being sent into exile, and he later used his travel experiences in his writing.

After returning home from exile, he produced some historical plays and also began work on The Three Musketeers (1844), Twenty Years After (1845) and The Count of Monte Cristo (1846). Alexandre Dumas was living in Belgium in 1852 but returned to Paris the following year. The political climate in France was still uncertain, and after Napoleon III came to power, Dumas left for Brussels. He returned in 1853 and started Le Mousquetaire a literary publication. (1853-1857). He also published Monte-Cristo (1857-1860). After the newspaper closed, he moved to Italy where he worked in as a keeper of museums in Naples before returning home in 1864. By this stage, Dumas was deeply in debt and spent his final years writing to keep his finances in order.

The Dumas Society was formed in 1971.

Alexandre Dumas was married Marguerite-Joséphine Ferrand in 1840. He went on to have various other relationships. He had a number of children. Dumas died on the 5 December 1879.