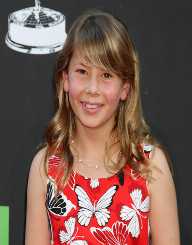 Australian conservationist, television personality, and actress Bindi Irwin was born on the 24 July 1998 in Buderim, Queensland, Australia to Steve and Terri Irwin. Her mother Terri is an American and father Steve was known internationally as The Crocodile Hunter. Irwin has dual American/Australian citizenship. From a young age, Irwin appeared on her father Steve’s successful television show, The Crocodile Hunter. She has a younger brother Robert.

Bindi Irwin was homeschooled until that age of sixteen. She then studied at TAFE Queensland East Coast and obtained certificates in Business and Tourism.

Bindi Irwin became known to the public firstly as a small child on her father’s show and later as the presenter of a children’s play Bindi the Jungle Girl who was on the Discovery Kids television network. Steve Irwin appeared Bindi the Jungle Girl until he died in September 2006. Steve Irwin died when pierced by a stingray while he was filming. After his death, Terri announced that she would continue with his conservation work. Bindi Irwin delivered a eulogy for her father before a big crowd at his memorial service. The event was also televised and drew over 300 million viewers. TV Week subsequently voted Bindi’s speech the television moment of the year.

In keeping with the family’s decision to carry on with Steve Irwin’s work, Irwin did a television special in the United States entitled My Daddy the Crocodile Hunter. She also sang with a group called Bindi Kidfitness and a child fitness DVD was made. There was a hip-hop album Trouble in the Jungle. Bindi Irwin has made some appearances on US television including The Ellen DeGeneres Show, the Late Show with David Letterman and Larry King Life. Bindi Irwin has presented awards, appeared on television and was on a float at Macy's Christmas Parade. In 2009, she appeared live on stage with the Jungle Girls at Australia Zoo.

During the Australian Big Brother television series in 2013, Bindi paid a surprise visit because housemate Tim had mentioned her a few times.

Derek Hough and Irwin were the winners of Dancing with the Star: Season 21 in 2015.

The Australian Geographic Society named the Young Conservationist of the Year in 2014.