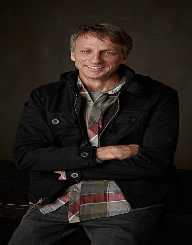 Tony Hawk was born on May 12, 1968, in Carlsbad, California, USA. His parents are Frank and Nancy Hawk. He also has a brother, Steve.

Tony Hawk loved skateboarding ever since he was a child. It was while he was attending Jean Farb Middle School that his real talent began to shine. Tony entered and won many skateboarding competitions as a preteen. He always pushed himself to learn new things and to bend the rules when it came to skateboarding.

Tony Hawk became a professional skateboarder when he was only 14 years old. He built up his career quickly, being known for his skills with aerial stunts. By the time Tony was 16 years old, he was already considered to be one of the best skateboarders in the United States. He often did high jumps from half pipes and other things like railings, stairs, and other small architecture pieces. His fame in these kinds of stunts landed him with the nickname “The Birdman.”

Tony Hawk joined his first skateboarding group, Bones Brigade Team, in 1982, early on in his career. Other members of the team included famous skateboarders Steve Caballero and Lance Mountain. In the early 1990’s, Tony Hawk and [his friend] Per Welinder, made a skateboarding company together called Birdhouse.

In 2012, Tony Hawk started up his own YouTube channel, titled, Ride. On this channel, he shows skateboarding moves and tricks that he and his friends try out.

Tony Hawk’s legendary skateboarding skills earned him cameos in several movies, including three movies in the Jackass series (Jackass: The Movie, Jackass Number Two, and Jackass 3D). He has also had a cameo in the early 2000’s cartoon about skateboarding called Rocket Power.

The Tony Hawk video game series helped to make Tony Hawk even more popular. In these games, players would often play as their character, while skateboarding through the streets of big cities while trying to do tricks.

Players could go through a story mode, where they played through several challenges to beat the game. Or they could play on a free play mode, where they could make their skateparks and virtually ride with their friends. The first game came out in 1999, and since then, 17 other Tony Hawk games have been made. Some of the most popular games are listed below.

Tony Hawk was the first skateboarder to land a 900-degree spin (spinning entirely around 2.5 times) when jumped from a half pipe. Others had tried the trick before him, but could not land it successfully. He accomplished this feat in 1999.

In 2008, Tony Hawk’s name was famous. Many skateparks around the country were being named after him. This was in part from his fame, and also his charitable donations. Throughout his career, he has donated money to build skateparks in low-income areas, so teenagers have a place to go and stay out of trouble.

Tony Hawk was inducted into the Skateboard Hall of Fame in 2009.

Tony Hawk has won several awards for the Kid’s Choice Awards and other award groups for Favorite Male Athlete over the years.

Six Flags Amusement Park has a series of rides named after the skateboarding legend.

Tony Hawk was first married to Cindy Dunbar in 1990. Together, the couple had one son, Riley (who also grew up to be a professional skateboarder). However, the couple divorced in 1993. He remarried in 1996 to Erin Lee. He had two children with this wife, Spencer, and Keegan. This relationship, too, ended in divorce in 2004. Tony Hawk married again in 2006, to Lhotse Merriam. Together, their child was a daughter, Kadence. This marriage ended in divorce in 2011. Tony Hawk was most recently married in 2015, to Catherine Goodman.