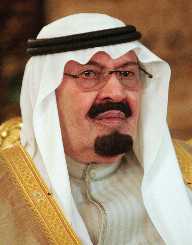 Abdullah of Saudi Arabia was born on the 1 August 1924 in Riyadh. He was the thirteenth son of Abdulaziz Ibn Saud, the father of modern Saudi Arabia. Abdulaziz became the first king of Saudi Arabia in 1932. Abdullah’s mother was Fahda bint Asi Al Shuraim, who descended from the Shammar tribe. She died when he was six years old.

Abdullah of Saudi Arabia was educated at court and given a conservative, traditional culture by Islamic scholars. Subjects included literature, religion, and science.

Becoming Mayor of the holy city of Mecca in 1961 was Abdullah's first official appointment. King Faisal (ruled from 1964 to 1975) appointed Abdullah Commander of the National Guard (1962). He brought the National Guard up to date with weaponry and also increased their numbers.

Later, when King Khalid (ruled from1975 to 1982) ascended the throne, Abdullah of Saudi Arabia made Abdullah Second Deputy Prime Minister (1975). During the 1970s, Abdullah was a spokesman for pan-Arab unity and a vocal critic of the policies of the United States about the Middle East.

When King Fahd( ruled from1982 in 2005) became king, he nominated Abdullah Crown Prince and Deputy Prime Minister 1982). Abdulla was not in favor of stationing United States troops in Saudi Arabia after the 1991 Iraqi invasion of Kuwait. He would have preferred negotiating with Saddam Hussein, but King Fahd disagreed with him.

A stroke in 1995 incapacitated King Fahd and Abdullah ruled as regent until King Fahd’s death in 2005. During this time promoted peace in the region, criticising acts of terrorism as being destabilizing for the Gulf region. He supported the Palestinians but reportedly had a strained relationship with Yasser Arafat (BBC News). In 1994, he criticised the actions of the Palestinians regarding the Gaza Strip and called for calm. After 9/11, during the US-led war against Iraq, Abdullah would not allow American planes to carry out airstrikes from Saudi Arabia without sanction from the United Nations.

As King, Abdullah of Saudi Arabia had a good working relationship with the West, mainly the US and the UK. He also supported Pakistan. He encouraged interfaith tolerance and understanding, and he was active in promoting knowledge in the Arab and Islamic worlds.

After the Arab Spring, he instigated large-scale development in the country including housing and education projects. During his reign, substantial amounts of money were spent on education, health, housing, and infrastructure.

The King Abdullah University of Science and Technology opened in 2009. It was the first co-educational campus in Saudi Arabia. There are scholarships for students, including women, to study abroad.

Women’s rights increased under Abdullah. He allowed them to run and vote in municipal elections (2011). Saudi Arabia entered two women athletes to participate in the 2012 London Olympics. They were Judoka Wojdan Shaherkani and Sarah Attar. At the time the BBC reported that King Abdullah was keen for women to play a more active role in Saudi society. Under his rule, Saudi Arabia did not back Assad in Syrian War.

As King of Saudi Arabia from 2005-2015, he was the custodian of the Two Holy Mosques, Prime Minister of the Council of Ministers and Commander of the National Guard. He also served as President of the High Council of Petroleum and Minerals, Chairman of the Council of Civil Service and Head of the Military Service Council.

The United Nations presented King Abdullah was presented with a gold medal for his peace initiatives.(2012). The Catholic Church made King Abdullah a Knight of the Order of the Golden Fleece. In 2012, Forbes ranked Abdullah as the seventh most powerful person in the world.

King Abdullah had thirty wives and thirty-five children. He died on the 23 January 2015 after being hospitalized in Riyadh with pneumonia.

As a young man, Abdullah of Saudi Arabia was a falconer. He also kept horses.

Abdullah of Saudi Arabia donated to many causes and organizations, including In giving $500 million to the UN World Food Programme. He donated $60 million after the Chinese earthquake in Sichuan and $10 billion to the endowment fund at King Abdullah University. He built a library in Casablanca, Morocco, a country where he had a holiday palace compound.