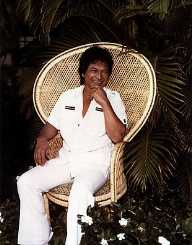 Donald Tai Loy Ho best known as Don Ho was an American singer and entertainer. He came to fame with his song Tiny Bubbles produced from an album of the same name. After graduating from the University of Hawaii, he served in the United States Air Force from 1954 to 1959 and took up music as his career.

Don Ho was born on August 13, 1930, in the Honolulu neighborhood of Kaka?ako. He was born to Emily (Honey) Leimaile Silva and James Ah You Puao Ho. He was of Hawaiian and Chinese descent on the paternal side and maternally, of Hawaiian and Portuguese descent. He was raised in K?ne?ohe. Don Ho attended the Kamehameha Schools graduating in 1949. He received a football scholarship to attend Springfield College in 1950 but later dropped off to enroll at University of Hawaii. He graduated with a Bachelor’s degree in sociology in 1953.

Don Ho recalled that while in California he bought an electronic keyboard from a music store in the local city of Concord and "That's when it all started." Since then he had a great interest in music. In 1959, he left the United States Air Force as his mother’s health kept failing.

Don Ho’s mother had established a family bar called Honey’s in Kaneohe, and with interest in music, Ho started performing in the bar. He also played at a nightclub called Dukes where he gained the attention of officials of some record company.

As his performance kept improving, Don Ho was signed to Reprise Records. His debut album under the label was “Don Ho Show” in 1965. After the release, he started performing in high-profile locations in New York City, Las Vegas and Lake Tahoe among others. His second album, a live compilation dubbed “Don Ho – Again!” was released in 1966. The album made it to the chart in the early days of its release.

That same year, Don Ho came out with his most famous song, “Tiny Bubbles.” The song made it to number 57 on the pop Billboard and the easy listening chart. He went on to release the album also called “Tiny Bubble” which charted in the album Top 200 for nearly a year. Throughout the start of his career until 1969, he was backed by The Aliis consisting of Rudy Aquino, Joe Mundo, Al Akana, Benny Chong, and Manny Lagodlagod.

Aside from music, Don Ho made guest appearances in television series. He appeared in I Dream of Jeannie and followed it with The Brady Bunch. He also guests starred in Sanford and Son, Batman and Charlie’s Angels. The latter works included McCloud and Fantasy Island. In October 1976 he started his weekday's television series The Don Ho Show, which aired on ABC. The show ran until March 1977.

On November 21, 1951, Don Ho married Melva May Kolokea Wong, his high school sweetheart. They married for 48 years and had six children. Melva May died on June 8, 1999. He had four other children with two different women. Ho’s children include singer Hoku and actress Kea Ho. He also married Haumea Hebenstreit, a production assistant for his show at the Waik?k? Beachcomber on September 12, 2006.

Don Ho’s health began declining in 1995 and suffered a mild stroke. Don Ho suffered several other illnesses, developing cardiomegaly, an enlarged heart unrelated to coronary artery disease that left him just about 30% of normal cardiac capacity. In 2005, he was diagnosed with cardiomyopathy and had pacemaker implantation. In December same year, he underwent a heart surgery where his own blood-derived stem cells were injected into his heart by surgeons in Thailand.

After the surgery, he remarked, "I'm feeling much better, and I'm so happy I came up here to do it." Don Ho suffered a cardiac arrest in 2006. On April 14, 2007, he suffered heart failure, collapsed and died in his Waik?k? apartment. He remains were cremated and the ashes scattered at sea.